Very sad to hear of the death yesterday of Larry D. Mann, age 91. He was the Canadian character actor perhaps best known as the voice of Yukon Cornelius in the television Christmas classic Rudolph, the Red-Nosed Reindeer (1964). He received a memorable manhandling from Timothy as T-Bone, the unfortunate used car salesman, in the Baretta episode “Set Up City” (10.29.75). 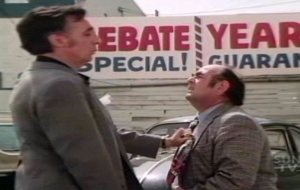 “There’s a scene in ‘Set Up City’ where Timothy roughs up a used car salesman,” the episode’s director, Curtis Harrington, told Penny Blood magazine. “Timothy was a bit out of control because he really hurt the other actor who later sued through the Screen Actors’ Guild.” I have no doubt that it was a case of Tim not knowing his own strength and not meaning any deliberate harm. We wish Mann peaceful rest and thank him for letting us know that “Bumbles bounce!”

PENNY BLOOD: How did you manage to direct a peculiar talent like Timothy Carey in What’s the Matter with Helen? (1971) and in “Set Up City,” a 1975 episode of Baretta?
HARRINGTON: I’m in that little club that includes Stanley Kubrick and John Cassavetes: directors who admired Timothy Carey for his uniqueness. The thing about Timothy was that he was as eccentric offscreen as on. That eccentricity is what we all loved, but it was not entirely controllable. Producers did not like to work with Timothy because he never did two takes the same way. The only way I got him on “Set Up City” was because the star of the show, Bobby Blake, gave his approval. But I adored Timothy Carey and was very happy to have him play a tramp in What’s the Matter with Helen? and a criminal in “Set Up City.” He was very inventive. He would ad-lib extra lines. Some of them were so funny that I would burst out laughing in the middle of a take. Of course, my laugh was on the soundtrack so we’d have to do another take, which was kind of embarrassing.
There’s a scene in “Set Up City” where Timothy roughs up a used car salesman. Timothy was a bit out of control because he really hurt the other actor who later sued through the Screen Actors’ Guild. When I first met Timothy, I was terrified of him. I couldn’t imagine that I’d ever work with him. But he knew who I was. One day I ran into him on the Fox lot and he hugged me and said: “Oh Curtis, you are the greatest, man! You’re the best!” I realized that he really liked me and I had nothing to fear. (Laughs) So I took him into my heart.
– Curtis Harrington, from “Curtis Harrington: The Bitter With the Sweet,” interview by Harvey F. Chartrand, Penny Blood magazine, issue 7 (March/April/May 2007)

The Pic of the Day for today is from the Baretta episode “Set Up City” which was first broadcast on October 29, 1975. Tim is jewel thief Joe Dineen, who, along with his partner Angel (Larry Block), enlists the aid of fresh-out-of-jail explosives expert Jake Hatch (Charles Durning) for their next big job. 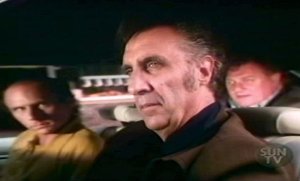 This episode was directed by Curtis Harrington, who also directed Tim in What’s the Matter with Helen? (1971). He once said in an interview that during the making of this episode, Tim was supposed to have roughed up Larry D. Mann‘s used car salesman a bit during their scene together. Tim apparently did his job too well, and Mann sued for medical expenses through the Screen Actors Guild. Ouch.