In celebration of the great Andre’ De Toth‘s 102nd birthday anniversary, today’s pic is the second of two key set photos from Crime Wave (aka The City is Dark) (1954) that I found on eBay a while back. Key set photos were shots taken on set and used for continuity purposes. Both photos feature Timothy menacing Phyllis Kirk, not surprisingly. 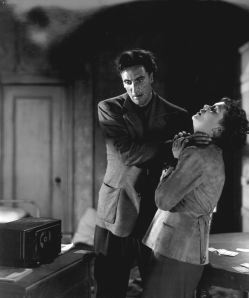 De Toth was born Sasvári Farkasfalvi Tóthfalusi Tóth Endre Antal Mihály in Hungary (then Austria-Hungary) on this date in 1912. When, during an interview, he was asked about Tim’s acting methods in this film, De Toth replied, “Who was acting?” All of his films are a treat, and most definitely worth watching. Mr. De Toth, The Timothy Carey Experience salutes you!