This week we will be featuring some of Timothy’s promotional stills, lobby cards and whatnot. First up, in honor of his co-star Don Calfa’s birthday anniversary today, is a promo still from Peeper (1976), the genial homage to 1940s gumshoe mystery flicks directed by Peter Hyams. Irascible torpedo Sid has his roscoe trained on our hero, Leslie C. Tucker (Michael Caine). 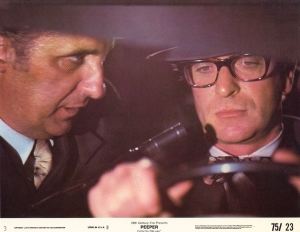 I’m sure I’ve mentioned before that I got a terrific interview with Calfa last year, wherein he recounted with great delight his experiences working with Tim in this film, and their subsequent friendship. We here at TTCE wish Don a most splendiferous birthday!