Today we revisit The Wild One (1953), directed by Laslo Benedek and starring Marlon Brando. Here we see “Chino’s Boy #1” getting the brilliant idea of pouring a bottle of beer on Chino (Lee Marvin) to spur him on during the big fight with Brando.

If I’m not mistaken, that is X Brands on the far right. He and Timothy co-starred in several episodes of Cowboy G-Men at around the same time this was filmed. They also appeared together in Naked Gun (1956) and Revolt in the Big House (1958). He very often portrayed American Indians on television and in film, even though he was of German heritage.

Our pic for today revisits the Cowboy G-Men episode “Beware! No Trespassing,” which first aired on November 1, 1952. Timothy’s henchman Benton is imparting vital information to his boss (Robert Lowery) and fellow henchman (X Brands), and looking rather silly as he does so. Another shot of Tim that makes me giggle like a schoolgirl.

Also look at the way the veins in his neck stick out. Tim certainly threw his entire physical being into his work.

Today we look at another pic from the Cowboy G-Men episode “The Secret Mission,” which premiered on October 4, 1952 – just over 60 years ago! Wow. Timothy, Robert Lowery and X Brands are spying on cowboy G-man Russell Hayden in the next room, trying to determine what his next move will be.

This is a rare shot of Tim in repose, which didn’t happen very often.

It’s about time to take another look at Timothy’s very brief appearance in the Cowboy G-Men episode “The Sidewinder,” which was first aired on May 2, 1953. He portrays a prisoner begging not to be sent to the stockade at an Army post. 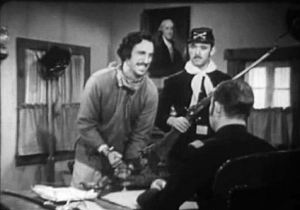 I apologize for the poor quality of the shot. I guess we should consider ourselves fortunate that these episodes still exist at all! X Brands also appears in this episode.

Our pic of the day takes another look at the Cowboy G-Men episode “The Secret Mission,” first airing on October 4, 1952. Timothy was teamed once again with X Brands as henchmen of the main bad guy, Robert Lowery. 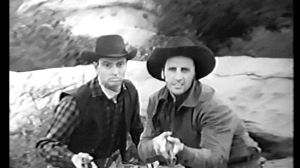 The television Western was fertile ground for many a young actor newly arrived in Hollywood in the 1950s. Timothy also appeared in an episode of the popular series Sheriff of Cochise (which wasn’t really a Western), “The Great Train Robbery,” which has so far eluded my grasp.

The Pic of the Day for your Monday takes another look at the Cowboy G-Men episode “Gypsy Traders,” first airing on February 28, 1953. Timothy and his fellow Gypsies, including Charlita and X Brands, are skeptical of the motives of federal crimebuster Pat Gallagher (Russell Hayden).

X Brands was a familiar face in Westerns, both on television (including two more Cowboy G-Men episodes with Tim) and in theaters, throughout the 1950s and 1960s. He often portrayed Native Americans, although he was not one in real life. However, according to his granddaughter, he was so convincing in his portrayals that he was honored by several Native American tribes. She also states that he was born Jay X Brands, but dropped the “Jay” after his father died and became legally known as X. This was a tradition that the oldest son in the family had carried out for generations.

Howdy, pardner! Our pic of the day comes to us from Naked Gun (1956), not the Police Squad! movie but a low budget B-Western directed by Edward Dew and an uncredited Paul Landres. Tim is yet another henchman of the bad guy, enjoying a smoke and a drink at the bar with his pals.

The mustache is pretty awesome. Another henchman is portrayed by an actor known as X Brands, who often played Indians even though he wasn’t one in real life. This film is also known as The Hanging Judge.