Today we take another look at the Kung Fu episode “Ambush,” the penultimate episode of the series. It first aired on April 4, 1975. Ill-tempered outlaw Bix Courtney has finally gotten his hands on the stash of silver he’s been coveting the entire episode. He’d better enjoy it while it lasts. 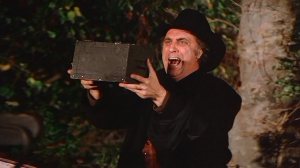 This episode was directed by Gordon Hessler, who got his first big break producing The Alfred Hitchcock Hour for television. He has scores of movie and TV credits under his belt, including Scream and Scream Again (1970), starring Christopher Lee, Peter Cushing and Vincent Price!