Marilyn Monroe was born 88 years ago today. This is what Timothy had to say about her in a 1958 interview with columnist Mel Heimer.

Tim is working on three projects: (1) to out-dance Elvis Presley in Macy’s window, (2) to kidnap Marilyn Monroe (“with her permission, of course”), and (3) to steal an Oscar. 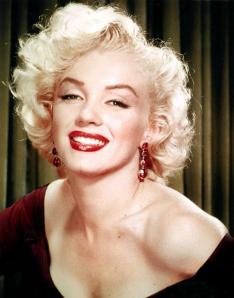 “I did a snake scene at a personal appearance in Hartford, Conn., and had trouble getting a girl to help. I mean, I didn’t want to get my mother for it… My mother wants me to be a priest.“

Timothy and his mother, Ida Agoglia Carey, from the work-in-progress documentary available at Absolute Films

A little late but no less heart-felt – Happy Mother’s Day, everyone! (I think I’m going to make this the default Mother’s Day post)

This week’s quote is actually a newspaper article about Tim that deserves to be reproduced in its entirety. It’s one of Mel Heimer’s My New York columns, from the Simpson’s Leader-Times of January 18, 1958.

I don’t want anyone out there to question my bravery ever again. I’ve just finished meeting Tim Carey and I’m still on my feet, still punching, still snarling all right, you guys, who’s next?

Timothy is this year’s Jayne Mansfield, male division. Ol’ Plain Jayne has slowed down a little now and no longer does anything short of murder to get her name in the publick printes. However, Timothy – “Hollywood’s wild man” – has taken up the slack.

He’s a big, black-haired Brooklynite of 24 [sic; he was actually pushing 29 at the time] who is, I am told, an actor. At least, he’s made pictures and currently is in Paths of Glory. Stanley Kubrick, its director, says of the wild man that he may be a clown offstage but he’s “an artistic giant” when you point the camera lens his way. Kubrick, of course, doesn’t have a detached viewpoint, so you’d better go see the picture and make up your own mind. I’ll go when I get my breath back.

“I’m in this other picture Bayou, see,” Timothy plunged in, smoothing out his Italian silk suit carefully, “and I do such a sensuous dance that it had to be censored. How about that? I got the inspiration for it from Lilli Christine, the burlesque ‘Cat Girl,’ who I saw dance in the 500 Club in New Orleans. It’s supposed to be an artistic dance. Hah, hah. It’s pure burlesque. Bayou‘s a good picture but you can’t understand most of the actors. Now Paths of Glory is a different kind of picture. It’s bold. You might say it’s brazen. Women get a spiritual cry out of it.”

“I’ve seen Paths of Glory 10 or 15 times. I think I’m very good in it. I was oh, kind of subdued in it. I liked the scene where I killed the cockroach.

“We were playing French soldiers and Ralph Meeker saw a cockroach on the table and said bitterly ‘Look at that cockroach; tomorrow we’ll be dead and he’ll be alive.’ So I slammed my hand on the cockroach and said ‘Now you got the edge on him.’

“This friend of mine has a snake farm in Maryland and the first time he showed me some of his pets, I was enticed, you might say. I did a bit with a snake in the Oasis Club on Western Avenue, Los Angeles, and 30 people ran out of the joint. Snakes are all right. Once a snake is civilized, he’s no harm at all.

“I did a snake scene at a personal appearance in Hartford, Conn., and had trouble getting a girl to help. I mean, I didn’t want to get my mother for it. Got one, though. My snake-farm friend flew in from California to help out. He brought me a big python. Smuggled it on the plane by wrapping it around him.

“We registered the python at the Statler in Hartford as ‘Pete Cajun’ but it was disappointing; the hotel people didn’t bat an eye. Later I rode through the town with the python around my neck. I guess I might say I threw dignity to the winds.”

There was a lot more of this but maybe you should know some of Timothy’s background. He was expelled from five schools and joined the Marines at 15.

Billy Wilder, the director, who had had some unsettling experiences with Tim when the wild man was trying to break into films (Tim came into Billy’s bathroom at 4:30 a.m. when the director was getting ready for an early day’s work – and promptly asked him for a job, enraging Wilder so he slashed his chin), ran off the set when Tim turned up to act in East of Eden.

“I beat up James Dean in that picture,” Tim said thoughtfully. “It was a wonderful experience. In The Killing, I shot a racehorse. My mother wants me to be a priest.”

Tim’s the man who lasted a week with a Columbia, S.C., ballclub (he’s never played ball) by telling the manager he was a good pitcher but had a sore arm. There’s a studio in Hollywood that put up a sign reading “Let’s Make the Best Pictures Here But Let’s Make Them Without Timothy Carey.”

Tim is working on three projects: (1) to out-dance Elvis Presley in Macy’s window, (2) to kidnap Marilyn Monroe (“with her permission, of course”), and (3) to steal an Oscar.

“However, I’m pretty conservative now,” Tim concluded pensively. “I’m writing screenplays and I want to direct. Then I want to retire. Maybe I’ll go back to 79th Street in Bay Ridge, Brooklyn, to live. I’ve always been very proud of Bay Ridge.”