On this date twenty years ago, Timothy passed away. It’s hard to believe it’s been twenty years already. However, though his corporeal form has left us, his spirit remains, as vital and larger-than-life as ever. For someone I never actually met, he certainly has essentially taken over my life. And I’m perfectly fine with that. Here is his obituary, as it appeared in the New York Times on May 17, 1994.

Timothy Carey, a character actor whose films ranged from Paths of Glory and One-Eyed Jacks to 1960’s beach movies, died on Wednesday at Cedars-Sinai Medical Center. He was 65.

His son Romeo announced the death on Sunday and said the cause was a stroke.

Timothy Carey’s acting career began with a part in Billy Wilder‘s 1951 movie The Big Carnival [aka Ace in the Hole] and included more than 50 feature films and many television roles.

He often played a villain. Two of his most recognized roles were in Stanley Kubrick films, The Killing (1956) and Paths of Glory (1957). He acted in One-Eyed Jacks (1961) with Marlon Brando and in John Cassavetes‘ Killing of a Chinese Bookie (1976).

Mr. Carey wrote and directed himself in The World’s Greatest Sinner, in 1962.

In addition to his son Romeo, he is survived by his wife, Doris, and five other children, Mario, Velencia, Silvana, Dagmar and Germain. 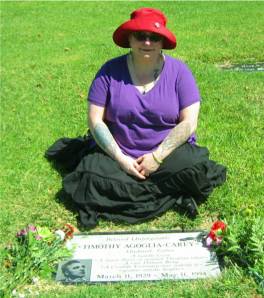 And since it’s Mother’s Day, here’s Tim and his mom.

TWGS [The World’s Greatest Sinner] has been difficult, but not impossible to see, until recently. Much rarer is Tweet’s Ladies of Pasadena, a collection of footage, shot between 1969 and 1974, that was slated for a TV pilot in the 70s. This train wreck makes TWGS look like Citizen Kane; my first reaction was that it was unwatchable, but as it went on and I laughed hard at one and then another ridiculous scene, I couldn’t look away, always wondering what the hell he might do next. Carey stars as the roller-skating, bib-overall wearing Tweet Twig, caretaker of a menagerie of animals including goats, chickens, ducks, dogs and kittens (all of which belonged to the Carey family). Who talk. Yes, Timothy Carey made a talking animal picture, and naturally, the German Shepherd has a German accent.

After the four hours of films were over, Romeo Carey, who expressed surprised that more people didn’t walk out on Tweet’s (several in the audience did), took questions from the audience. I asked if he knew about this newspaper item:

MUNICH, Germany, May 7 (Reuters)–Timothy Carey, 31-year old Hollywood actor who disappeared from his hotel here Sunday night, was found gagged and handcuffed on a lonely road outside Munich this morning, the police said here today. They said the actor had hitched a ride in a car driven by two English-speaking men, who held him at gunpoint, robbed him of $40 and finally dumped him by the roadside.

Romeo Carey did know about it. After shooting for Paths of Glory had wrapped, Timothy Carey had been frustrated with the publicity around Kirk Douglas and his other co-stars. So he faked his own kidnapping. In another incident around that time, the crew had gone to a burlesque show one evening in which one performer ended her act in a bubble bath on stage. Timothy Carey walked right up to the stage and got into the bubble bath with her.

Carey’s son painted a picture of life with father that was funny and uncomfortable. Romeo admitted that he used to be tremendously embarrassed by the Tweet’s footage. Toward the end of his life Carey became obsessed with the artistic possibilities of the fart. His last, unfinished project was a play called The Insect Trainer, about a man convicted of murder by farting. Carey liked to fart in church, just before reaching out to greet his neighbor in a sign of peace.

Nicolas Cage ate a roach to stay in character. Carey only smashed a roach, also in Paths of Glory, but his most brilliant performance may have come off-screen. On May 8, 1957, the New York Times reported that the 6′ 4″ actor was found handcuffed and gagged on a desolate road outside Munich. Police said the actor had been picked up hitchhiking and was robbed by two English-speaking men. Now, if you know what Carey looks like, you might well ask what kind of idiot would jump him?

None is what kind. Carey staged his own kidnapping. At a screening of Carey’s work as a director, his son Romeo explained that his father was frustrated with the publicity that Kirk Douglas and his other Paths of Glory co-stars were getting, so he rolled his own.

Timothy died of a stroke eighteen years ago today. It is also the birthday anniversary of his hero, Salvador Dali. Coincidence? You make the call! 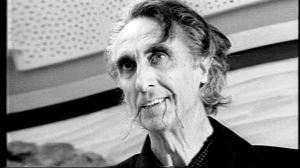 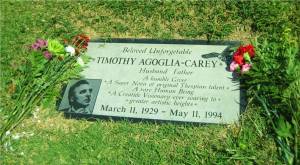 May Timothy continue to entertain us, inspire us, enchant us, and make us think. Rest well, Tim. We miss you.