Another legend has left us. Perennial cinematic fireball Mickey Rooney passed away yesterday at the age of 93. Timothy worked with him in Francis in the Haunted House (1956). Interestingly enough, Rooney wrote in his autobiography that he had virtually no memories of the making of this film. How could he forget being carried around by Tim? (I’m being facetious; you’ll see why in a moment.)

Rooney, born Joe Yule, Jr. in Brooklyn, made his stage debut in his parents’ vaudeville act at the age of 17 months. He made his first film, a short, in 1926. He was working on a new version of Dr. Jekyll and Mr. Hyde when he passed. That’s an 88-year film career, ladies and gentlemen. Eighty-eight years. Let that sink in for a moment. Better minds than I will be writing better tributes to him and his brilliant career than I ever could, so I leave you to them. I’ll just say rest well and thank you, Mickey.

Today’s pic revisits Francis in the Haunted House (1956), starring Mickey Rooney as the put-upon sidekick to the famous talking mule. Timothy, in the “Igor” role as Hugo, silent, lumbering minion of the castle, is showing a gaggle of not-too-bright cops – including Dick Winslow, James Flavin and David Janssen – the door. 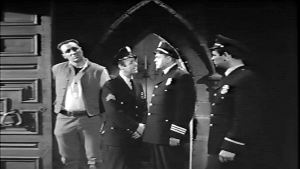 My goodness, Hugo – is that the key to the dungeon in your pocket, or are you just happy to see me? Rooney admitted in his autobiography that he remembers nothing about the making of this film. How could he forget being carried around by Tim? Romeo Carey told me that his father’s role in this film was the springboard for the very first “Timothy Carey Fan Club”!

Today is the 92nd birthday anniversary of the indefatigable Mickey Rooney! Here he is with Timothy and Helen Wallace in a promotional still for Francis in the Haunted House (1956).

Rooney is one of our few remaining Hollywood legends. We wish him a wonderful birthday!

Today’s pic is the last good shot of Timothy as Hugo, hulking castle minion, that you will see in Francis in the Haunted House (1956), directed by hard-working Charles Lamont. The spooky goings-on clearly have Hugo flummoxed. 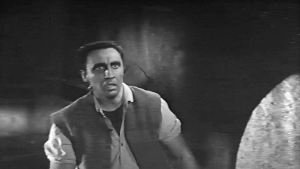 Mickey Rooney admitted in his autobiography that he has no memories about making this film. How could he forget working with Tim??? Here’s another of Timothy’s films that needs a proper DVD release, but is available for immediate viewing on Amazon Instant Video.

Two things for you today: The first is an original production still from Francis in the Haunted House (1956). Tim and Charles Horvath are committing some mayhem on hapless Mickey Rooney, who admitted in his autobiography that he remembers nothing about the making of this film. This picture must have been made around the same time as Chain of Evidence (1957), as Tim has the same Frankenstein-esque flat-top haircut in both.

Secondly, I have a question for you all. Would there be any interest out there in having a forum added to the blog? It might be a nice place for folks to have actual discussions about Timothy and his films. Please let me know and I’ll get on it! Thanks for all your support, kind words and encouragement!

Boo! Our pic for today is from Charles Lamont‘s Francis in the Haunted House (1956). Tim doesn’t have much to do but look menacing and open doors and gates. At least in this shot, with Helen Wallace and Mickey Rooney, he gets to indulge in some comedy. He thinks he’s seen a ghost.

You will probably remember Helen Wallace in her uncredited role as the customer in search of humane bug powder in Sam Loomis’ hardware store who declares, “And I say, insect or man, death should always be painless,” in Alfred Hitchcock’s Psycho (1960).