Although some directors consider Carey “hard to work with” his talents have been used in devious ways many times. He’ll do an incredible screen test, they tell him “thanks but no thanks” and have another actor study his performance and copy it for the actual film!

Timothy’s son, Romeo Carey, directed him in a 1988 short called THE DEVIL’S GAS. In ’89, Timothy, (along with Johnny Legend), was a guest on the L.A. public access program, Little Art’s Poker Party. He acted out scenes from some of his films, sang “Jambalaya,” talked about Dali and making wind and said, “The combustible engine has got to go. It’s like glorifying arsenic.”

After that [The Wild One], I tried to get into PRINCE VALIANT (54, Robert Wagner starred). So I went to Western Costume to dress up like Sir Black [sic; the character’s name is actually Brack. The part eventually went to James Mason], the heavy in it.They fitted me in this outfit, all sashed pants and that had a medieval glove with a weapon from that era. And I thought, how am I gonna get in there, so I went to climb the fence at 20th Century Fox, but I couldn’t make it because of the clothes I had on. It was right near a golf course and a golfer helped me over with a ladder. I told him I was an actor on the set who got lost. I tried to find the director, Henry Hathaway, but he wasn’t in his office so I went to the commissary where he was having lunch and said, “Here I am, Sir Black! My men number many. I’m here for the part. Do I get it?” I took out my knife. He said, “Put the knife away, you got the part.” Then I was escorted off the lot. I never got the part, but I enjoyed it. It was fun.

Today’s pic is a rather unusual one. It’s another shot from a film that Timothy does not actually appear in, Herbert Ross’ Play It Again, Sam (1972), starring Woody Allen and based on his stage play. There is super-cute Diane Keaton, and just to her right is a flier for a screening of The World’s Greatest Sinner (1962).

The film takes place in San Francisco, and we know that Sinner had several underground screenings there. It would be great to know which screening the flier is actually from. I must thank once again Tim’s old friend Michael Murphy for bringing this to my attention!

“Somewhere around there I was kicked out of six films in a row. Then I did BAYOU and they wanted me to play the heavy, so I went down to Louisiana and played a Cajun, Ulysses. ‘What I want I gonna get and no dirty Yonkee from swell country is gonna take it away from me!’ Peter Graves takes away my woman and we have a big fight scene in the cemetery and I fall on an axe.” Carey’s Cajun bully was memorable (other characters refer to him as a shark and a snake), but his standout bit was doing an incredible uninhibited dance to accordion music. He hops in the air, does rubberleg moves, caresses himself and scratches like he has fleas, while a storm brews. The Ulysses dance is so good that it’s edited in several times. BAYOU was made at about the same time as Roger Corman‘s SWAMP WOMAN. Both featured Corman regulars Jonathan Haze and Ed Nelson. BAYOU was directed by Harold Daniels who had co-directed the famous roadshow hit, THE PRINCE OF PEACE with William Beaudine.

You know, I was always a hound for publicity. They were doing the Academy Awards and Brando was up for it. Well, I knew him from The Wild One, I knew he was going to get it (for On the Waterfront), so I was getting dressed up for it and I was going to go up there and get it before he got there, but some guy from Western Costume who was dressing me up talked me out of it.

Congratulations to all of tonight’s Oscar winners!

Timothy Agoglia Carey is directing a play in Hollywood this month about death by farting [The Insect Trainer]. He’s been acting in films since 1951, was in classics with Brando and Dean, worked several times each for Kubrick and Cassavetes, was in the exploitation classic POOR WHITE TRASH [aka Bayou pre-exploitation] and made a movie that would be a cult classic if only people could see it – WORLD’S GREATEST SINNER. In various books, the 6’4″, now 65 year old [sic – he was actually 61 at the time of this interview] Carey has been called “a heavy eyed character actor, often a loathsome villain”, “totally without attractive characteristics, repulsive looking”, and “the least lovable actor since Rondo Hatton“. He’s also considered a great actor and his fans in the business include Jack Nicholson, Peter Falk and Brando. Here, often in his own words, is the Timothy Carey story. 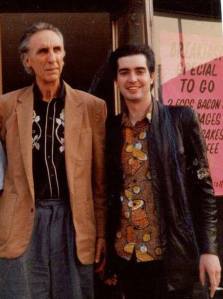 The first time I met [Francis Ford] Coppola, he kept asking me to do The Godfather. So I did a little Italian scene and they kept asking me to come up to San Francisco to do a tape there, but I didn’t go up, I just didn’t feel like going. I was in the middle of doing Tweet’s Ladies of Pasadena. Later on, he wanted me to do The Godfather II, so I went down to Paramount and did a scene. My son was with me, eating some Italian pastries and at one point I reached into the pastry box and pulled out a gun and shot Coppola. He was just shocked. He didn’t know what to do, but he wanted me even more after that, but I never went there. It just never materialized. 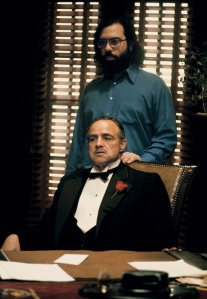 Coppola and Marlon Brando on the set of The Godfather (1972)

I did a great thing in Convicts Four. I said, “You’re a great screw,” but they changed it around. They were afraid it was gonna mean I was screwing the guard. It had nothing to do with that. They’re always looking at the negative side.

“When I was working with Debbie Reynolds for the second time [Ed. note: it was actually for the first time, at least as far as I know!] (in The Second Time Around, a western comedy) at 20th Century Fox, a fellow came up to me and complimented me on my acting. He said he was a composer and the guy he came with, his next door neighbor, played the guitar. I said, ‘What’s your name?’ He said, ‘Frank Zappa.’ So I said, ‘OK, I have something for you. We have no music for The World’s Greatest Sinner. If you can supply the orchestra and a place to tape it, you have the job.’ And that’s what he did. Around the same time he was on the Steve Allen Show. That’s where our friendship stopped. Steve asked him what films he did. He said, ‘I did The World’s Greatest Sinner, the world’s worst film and all the actors were from skid row.’ It wasn’t true. The press said I was the world’s greatest ham, and that The World’s Greatest Sinner was a travesty of the arts. Zappa didn’t like that and he started to get on their bandwagon. The opening night at the director’s guild, he was in complete awe. He walked into the window and banged himself in the head. He didn’t even know there was a window there.”

For a video of Zappa’s appearance on the Steve Allen Show, please go here.

“Loathsome,” “repulsive” and “most socially undesirable” have all been tossed around in various film guides attempting to describe the late character actor Timothy Carey. Renowned for his dominating presence in Stanley Kubrick’s early films The Killing (1956) and Paths of Glory (1957), Carey had the exhibitionism and humility of an aging circus clown, suffering to invest everything he had into even the smallest of bit roles. The sack-shaped giant with the oil spill hair and cadaverous grin died of his third major stroke on May 11, 1994. But what remains unmentioned in reference sources are his humanist spirit, and love for the Average Joe that inspired not only his acting, but his own writing and directing ventures, which were as ridiculous as they were revolutionary. 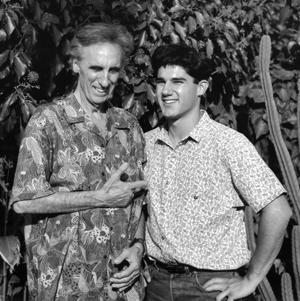 Timothy with Ara Corbett, summer of 1992