Music like the worst nightmare the Cramps ever had.

Timothy Carey – the charismatically malevolent “heavy” of The Killing, The Wild One, Paths of Glory, and East of Eden – single-handedly made this film between 1960 and 1963 in and around the town of El Monte, outside Los Angeles. Its plot centers on forty-year-old Clarence, who quits his job at an insurance company so that he can don the mantle of a rock star and run for public office as God. Carey’s portrayal of a rock star in a gold suit backed by a ragtag Mexican band is so fantastically bizarre that it puts Salvador Dali (Carey’s idol) to shame. During his main performance, which is sour and atonal, Carey falls to his knees and screams, “Please! Please! Please!” (Without ever having seen or heard of James Brown!)

The World’s Greatest Sinner isn’t a music movie per se, but its soundtrack stands out. For the background music, Carey hired a young, unproven local odd-ball, Frank Zappa, to compose a full orchestral score. Their association was short-lived, however. Appearing on the Steve Allen show playing a bicycle, Zappa made disparaging remarks about the film that earned Carey’s lifelong enmity.  (Still, they both made cameo appearances in the Monkees‘ Head.) Although this crude but uniquely imaginative undertaking was ignored by major distributors when it first came out, history has heaped kudos on The World’s Greatest Sinner – and on Carey for his bravery, wit, and vision. Fans, take note: Still alive, Carey makes occasional film and TV appearances. He also pops up at showings of his films at revival houses around L.A. In early 1991, he was completing a stage play, The Insect Trainer, about a postal worker killed by a fart.

– Art Fein, from Hollywood Rock: A Guide to Rock ‘n’ Roll in the Movies by Marshall Crenshaw (HarperPerennial, 1994) 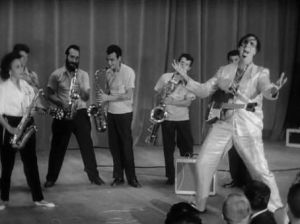