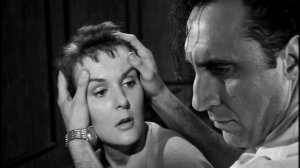 Vaughn had some interesting things to say about Tim’s characterization in his autobiography, A Fortunate Life:

The second picture I did was for Allied Artists and was titled Unwed Mother, a very provocative title for the late fifties. It starred Timothy Carey, an actor who had scored in Stanley Kubrick’s Paths of Glory alongside Kirk Douglas. In our picture, Timothy played the role of an abortionist (also pretty frisky stuff for that time). When he arrived on the set to do his scene, dressed appropriately in a cheap dark suit, he opened his black medical bag and from it brought out some of the ugliest, vilest-looking knives, tools, hammers, and sundry stuff you’d likely see only in some triple-X horror movie. This bag had not been furnished by the prop department, nor was a bag of that kind mentioned in the script. It was all Timothy’s idea, and he had to be talked out of using it in his scene by the director, who threatened to have him fired and, if possible, kicked out of the Screen Actors Guild. He finally did acquiesce, and I heard very little about or from him since then.

I guess Vaughn forgot about the Man from U.N.C.L.E. episode he and Tim did together in 1967.