Today we take another look at Blanchard, the unhinged magician’s assistant of “The Resurrection of Carlini,” the episode of The Greatest American Hero that first aired on November 19, 1982. He is being questioned by the cops, and is, predictably, not being very forthcoming. 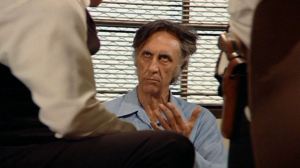 Directing this episode was veteran television producer and director Arnold Laven, one of the co-founders of the Levy-Gardner-Laven production company. He produced Tim’s episode of The Big Valley, “Teacher of Outlaws” (2.2.66), directed by Michael Ritchie.