We have a theme this week, and it’s “Timothy in color.” So let’s get the ball rolling with “Ambush,” the episode of Kung Fu that was first aired on April 4, 1975. Grumpy outlaw Bix Courtney is, well, grumpy. 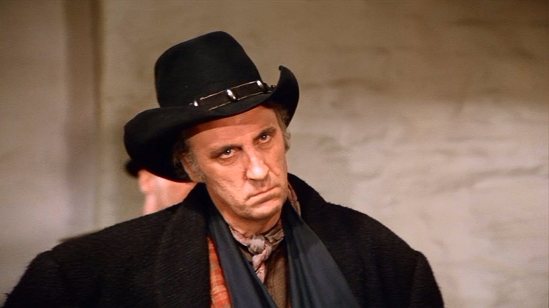 This episode was one of the earliest instances in which Tim is billed as Timothy Agoglia Carey. Agoglia was his mother’s maiden name. Her father, Rocco M. Agoglia, was proprietor of the Bank of Agoglia in Brooklyn. He is buried there in a beautiful mausoleum in Green-Wood Cemetery.

Kicking off the week is another look at Bix Courtney, the ill-tempered outlaw of the Kung Fu episode “Ambush.” It was first broadcast on April 4, 1975. Here he confronts series star David Carradine. 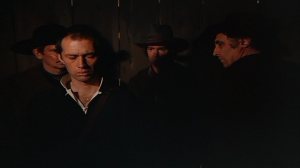 The son of legendary character actor John Carradine (also in this episode), David created his own legend over the years as a gifted, award-winning actor, musician and martial artist. He topped off a memorable career with his wonderful performance as the title character of Quentin Tarantino‘s Kill Bill: Vols. 1 & 2 (2003-4). His accidental death in 2009 robbed us of a great talent.

Finally, it’s here! Today’s pic is from the just-released-to-video CHiPs episode “Kidnap,” first broadcast on January 26, 1980. Timothy is a ne’er-do-well by the name of Solkin, who, along with his partner in crime Bickel (Warren Berlinger), is on his way to court to face a number of charges. Needless to say, things go awry from there. 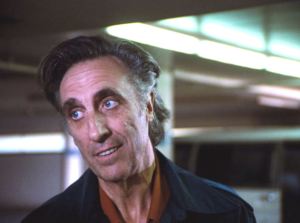 This episode was directed by Gordon Hessler, who had previously directed Tim in the Kung Fu episode “Ambush” (4.4.75). Unfortunately Tim doesn’t get too much to do here other than drive a Rolls-Royce, but he does get some good line reads in. I had forgotten how enjoyably silly this series could be. Check it out!

Happy New Year, everybody! Let’s kick off 2015 by taking another look at the Kung Fu episode “Ambush,” first airing on April 4, 1975. Grumpy outlaw Bix Courtney is after a stash of silver in the possession of saloon owner Jennie Malone (Rhonda Fleming).

One of the most beautiful and talented stars ever to grace film and television screens, Ms. Fleming, a Los Angeles native, was seemingly born to be in pictures. The story goes that the cameraman on one of her films decided to play a little joke and deliberately photograph her badly, just to see if it could be done. Apparently, it couldn’t. No matter how much he screwed it up, the red-headed star still came out looking amazing. She is also quite a good singer.

Better late than never, today’s pic comes to us from the Kung Fu episode “Ambush”. It first aired on April 4, 1975. While waiting with his gang to track down a stash of silver, Timothy’s grumpy outlaw Bix Courtney decides to be just plain rude to blind preacher Serenity Johnson (John Carradine).

Carradine, father of series star David Carradine, is a legend in his own right. He made his acting debut at the age of 19 on the New Orleans stage and never looked back. His craggy features and stentorian voice can be seen and heard in everything from James Whale‘s The Bride of Frankenstein (1935) and John Ford‘s The Grapes of Wrath (1940) to Ted V. Mikel‘s The Astro-Zombies (1968) and Al Adamson‘s Horror of the Blood Monsters (1970). From the sublime to the ridiculous, indeed. He even sings the title tune of Coleman Francis‘ Night Train to Mundo Fine (aka Red Zone Cuba). You’ll never forget it – no matter how hard you try. A lesser actor’s career never would have survived such atrocities. Carradine emerged triumphant and never stopped working, right up until his death in 1988.

As awesome as it would have been for Timothy to have shown up in an episode of that Leonard Nimoy-hosted “mysterious mysteries” series, this post isn’t about that. Instead, as mentioned yesterday, I’m going to list Timothy’s television appearances that I have yet to acquire on DVD. I have a want list up for most of these over at ioffer.com, but just in case any of you lovely people have any leads on where one might get ahold of “collector to collector” copies of these, I thought I would present them here. So, in chronological order, let’s start our search:

A brand-new addition to Tim’s IMDB page, although his presence in it is listed as “unconfirmed.” Season 1, episode 16; directed by the great Norman Lloyd. First broadcast on April 18, 1952, which would make this his earliest recorded performance on record, if indeed he is in it.

My hubby wrote about this one here a while back. It hasn’t been added to Tim’s IMDb page, but it really should be as its existence is well documented. A two-parter from season 1, first airing on November 9 and November 27, 1952. It’s out there somewhere.

Season 1, episode 9. This is another recent addition. It was first broadcast on March 3, 1953. Ed Wood stalwart Lyle Talbot is in it too!

Season 3, episode 13. The second of two episodes of the series in which Tim appears, this one was first broadcast on December 11, 1970. He plays a character who goes by the intriguing name of “Desert Rat.”

Season 1, episode 13; first broadcast on February 22, 1974. It’s listed as “A Funeral for Max Berlin” on IMDb, but numerous other sources list it as “Max Fabian” (oddly enough, the name of the put-upon theatrical producer portrayed by Gregory Ratoff in All About Eve [1950]), so I’m going with that. Based on the real-life adventures of undercover cop David Toma, the series was retooled after one season and became Baretta, after star Tony Musante refused to sign on for another season. Which leads us to…

Season 4, episode 16; first broadcast on February 16, 1978. The last of Tim’s four appearances in the series. From reading the brief plot synopses found around the internet, I have a feeling Tim’s character is particularly heinous in this one. And finally… 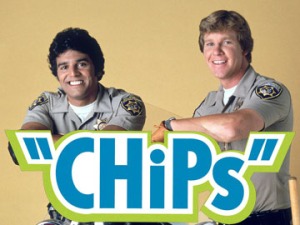 And there you have it! Man, that took forever. Thanks, everyone!

Today we take another look at the Kung Fu episode “Ambush,” the penultimate episode of the series. It first aired on April 4, 1975. Ill-tempered outlaw Bix Courtney has finally gotten his hands on the stash of silver he’s been coveting the entire episode. He’d better enjoy it while it lasts.

This episode was directed by Gordon Hessler, who got his first big break producing The Alfred Hitchcock Hour for television. He has scores of movie and TV credits under his belt, including Scream and Scream Again (1970), starring Christopher Lee, Peter Cushing and Vincent Price!

Our pic of the day is another from the Kung Fu episode “Ambush,” first aired on April 4, 1975. Bad guy Bix Courtney is under the wary eye of saloon manager Fred (Gene Dynarski).

Dynarski has been a solid television mainstay since the 1960s. Trekkies will remember his appearances in both the original and Next Generation series. Timothy worked with a lot of Star Trek actors! I personally wish he had turned up in my favorite episode of the original series, “A Piece of the Action” (1.12.1968).

Our pic for today (don’t forget to click to embiggen for all the pics) is another view from the Kung Fu episode “Ambush,” which first aired on April 4, 1975. Timothy’s bad guy Bix Courtney may spend the bulk of the episode in Jennie Malone’s (Rhonda Fleming) saloon, lying in wait like a grumpy spider in his web, but he still takes a moment to flirt with one of the saloon gals.

Courtney is so dour throughout the episode that it’s rather startling to see him light up like this, if only for a moment. Shockingly, a video of this episode still remains on YouTube, so I urge you to check it out while it’s still there.

EDITOR’S NOTE 09/18/13: Another one lost to copyright infringement. My apologies, gang.

This week’s video is more of Tim on television in the 70s! We present the Kung Fu episode “Ambush,” first broadcast on April 4, 1975. It was directed by Gordon Hessler, who also directed Tim in the CHiPs episode “Kidnap” (1/26/80). Co-starring are Rhonda Fleming, John Carradine and Pat Morita.

There are several parts, so be sure to catch them all. Tim is especially mean, sullen and grumpy in this episode.