Timothy Carey, the name has a certain aura to it. Some cinephiles know this feeling, those who go out on a limb and watch what little role he has. Carey, a character actor who zigzagged through the latter half of American cinema’s history, from A to Z pictures and everything in between, had a special talent. He could make a thin role into something memorable. He threw his 6’ 4’’ body around and spoke with a voice that sounded more like a cement mixer. He stole scenes, evaporating the memory of those that came before and after it.

Only Stanley Kubrick and John Cassavetes managed to integrate Carey into their films seamlessly. For both filmmakers, he appeared twice in their work. For Kubrick: The Killing (1956) and Paths of Glory (1957). For Cassavetes: Minnie and Moskowitz (1971) and The Killing of a Chinese Bookie (1976). They were able to rein in Carey, controlling his high-strung acting for maximum effect. In Paths of Glory, in fact, Carey gives a career-performance. An interlude from the psychotics he often played, as Private Ferol, Carey is a smooth man, someone who would fit in with Jack Kerouac and co., not WWI France. By film’s end, he becomes unraveled. Along with Ralph Meeker and Joe Turkel, he’s one of the soldiers court-martialed and executed. “I don’t want to die,” he repeats, sniveling, whimpering, and crying as he faces the firing squad.

For every friend, Carey had three or four enemies, people who couldn’t tolerate his brand of free-wheeling, combusting improvisation. Fact and legend often blur in Hollywood history. In Carey’s case, there seems to be more legend than fact. His bouts with actors and directors are tabloid-worthy and tailor-made to his outsider persona. Billy Wilder and James B. Harris fired him. Elia Kazan dubbed his guttural lines. Richard Widmark and Karl Malden beat him. Marlon Brando stabbed him with a pen. Always cheeky, Carey proclaimed that he was fired more than any other actor in Hollywood.

The Insect Trainer’s main character, Guasti Q. Guasti, is convicted of murder after farting so powerfully that a woman falls from her chair, hits the floor and dies. The play is characteristic theatre of the absurd, full of non-sequiturs and jarring stage action. Carey was hard at work rehearsing the play before his passing and created a philosophical tract about the virtues of flatulence. Carey’s son Romeo is planning a revival of The Insect Trainer, due to premiere in Los Angeles this spring. Romeo hopes to take the production on the road.

For all of Timothy Carey’s antics, he remained a devoted family man with a wife (only one) and six kids and endless dogs, cats, chickens, and horses. He lived out his life in the quiet suburb of El Monte, preferring the company of his animals to the unearthly world of Hollywood society. As he admits, he “made lots of fast enemies” during his career, but readily forgave his antagonists, as they were often just not ready to appreciate his uniqueness.

James B. Harris, the crusty producer/director who had many a run-in with Carey over the years acknowledges, “I know he’s so bizarre and I don’t think it’s gratuitous. I think there is enough humanity in this man. I think he could make a scene better than anyone else.” This humanity described by Harris encompassed a sympathy for the underdog: Carey was a supporter of Palestinian and Native American rights. The romantic equation, the ability to triumph despite the odds, played a great part in his art and his outlook.

In this promotional still from James B. Harris‘ prison drama Fast-Walking (1982), Timothy is expressing exactly how I’m feeling! The pathology report from my lumpectomy surgery last week revealed a 1.5cm tumor with negative margins, and the sentinel lymph node biopsy was also negative. No further cancer cells to be seen anywhere! Huzzah!!

Now on to a course of radiation and hormone therapy. This is the best possible news I could get at this point. Come on and celebrate with Tim and I!!

Let’s kick off the week with another look at Bullet, the junkie con of James B. Harris‘ prison drama Fast-Walking (1982). Here he expresses his displeasure with Wasco’s (Tim McIntire) money-making scheme. 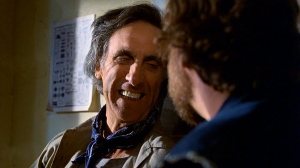 As we all know, Harris is the man who fired Timothy from Paths of Glory (1957). As Harris recently recounted in an interview with Film Comment, “I got a call at six in the morning from the Munich police, saying Tim had been found abandoned on the highway, bound hand and foot, claiming he’d been kidnapped. They thought production was responsible, looking for publicity, that it was a staged act. I said I knew nothing about it, but we needed him to work—they were holding him down at the police station. I told them that Tim was making up this story because he wanted the publicity, not us. So they said they would accommodate us by bringing him to the film studio—they were gonna interview him there. But Tim wouldn’t agree to the statement he was supposed to sign, he kept changing things about it. So I went up to Tim and said: ‘We’re all waiting for you. Sign the paper and get to work.’ And he wouldn’t sign the paper, so I fired him right there.”

How did Paths of Glory come together?

Once Kirk Douglas agreed to do the film, he was very helpful in influencing United Artists to finance it. He was scheduled to do another film for UA called The Vikings, and I think he suggested that if they didn’t do Paths of Glory, he would take The Vikings elsewhere. Do you know the story about how I fired Tim Carey on the set of Paths of Glory?

Well, I got a call at six in the morning from the Munich police, saying Tim had been found abandoned on the highway, bound hand and foot, claiming he’d been kidnapped.  They thought production was responsible, looking for publicity, that it was a staged act. I said I knew nothing about it, but we needed him to work—they were holding him down at the police station.  I told them that Tim was making up this story because he wanted the publicity, not us. So they said they would accommodate us by bringing him to the film studio—they were gonna interview him there. But Tim wouldn’t agree to the statement he was supposed to sign, he kept changing things about it. So I went up to Tim and said: “We’re all waiting for you. Sign the paper and get to work.” And he wouldn’t sign the paper, so I fired him right there. You’ll notice in the battle scene, you never see the three men put on trial for cowardice. That’s because the battle was the last thing we filmed, and we couldn’t show the two other actors without showing Tim, too.

The crazy actor who was in Paths of Glory with the big bug eyes was Timothy Carey. He was a method actor. Huge overactor. Carey, who was nuts, doesn’t show up one day. They’re shooting on a tight schedule because they don’t have a lot of money to do it. [Stanley] Kubrick and [producer James B.] Harris are going crazy. They get a call from the police. Carey has been found bound and gagged in the woods behind a house in the outskirts of Munich. He says, “Oh, Jesus, thank God they found me. I got kidnapped and they robbed me.” Jimmy thought, this is really weird. He’s a huge guy. Who’s going to kidnap and rob him? Carey’s back working. Jimmy goes over to the house where he was found, and the residents finally confess that Carey gave them a hundred bucks to call the police and bind and gag him themselves. He’d been on a toot for two days, and he knew he’d get fired. That’s why you love to work. That stuff doesn’t happen in offices. It only happens on a set. That’s why I love it so much.

– Tom Mankiewicz, My Life as a Mankiewicz: An Insider’s Journey Through Hollywood (The University Press of Kentucky, 2012)

This week’s video is the tail end of Timothy’s pivotal scene from Fast-Walking (1982), directed by Paths of Glory (1957) producer James B. Harris. Junkie con Bullet tries to pull a fast one on Wasco (Tim McIntire), but soon comes to regret it.

I’ve expressed my reservations before about this rather sleazy film, but the two Tims definitely make it worth a look. Check it out!

Today we take another look at Bullet, the junkie con of James B. Harris‘ prison drama Fast-Walking (1982). It’s interesting how the shadow of Timothy’s profile is almost another character in the film itself.

Tim found himself playing a prisoner many times in his career. The role of the convict offers many rich characterization opportunities; perhaps that’s one reason why he appeared to be drawn to them. Bullet is certainly a piece of work. I do believe this is the only film in which Tim uses foul language on-screen. In this instance the character demanded it, but that was something he certainly didn’t need to depend on during his acting career. His personality was enough to make a statement.

Our pic today revisits Fast-Walking (1982), the prison drama directed by James B. Harris, the co-producer of Paths of Glory (1957) and the man who fired Timothy from that film. Ill-smelling junkie con Bullet appears delighted by the business plan being outlined to him by Wasco (Tim McIntire).

Harris did indeed fire Tim from Paths, after all his major scenes had been shot. His shenanigans on the set had proved too much, the last straw being the faked kidnapping. Harris knew, though, that it was really too late. “You’ve already stolen all the scenes!” he exasperatedly told Tim. Twenty-five years later, here he was working with Tim once again. I can only guess that things went much more smoothly this time.

Before it gets taken down for “copyright infringement,” please enjoy this week’s video! It features most of Tim McIntire‘s epic drug monologue from James B. Harris‘ Fast-Walking (1982). Our Timothy, as junkie con Bullet, is mostly silent but reacts to McIntire’s riff as if he were grooving on a fine jazz performance.

It’s very sad to contemplate that only four years after this film was released, McIntire was dead, having lost his own battle with substance abuse.