In films since 1952, character actor Timothy Carey gained a cult following for his uncompromising portrayals of sadistic criminals, drooling lechers, and psycho killers. His definitive screen moment occurred in Stanley Kubrick‘s The Killing (1956), in which, as two-bit hoodlum Nikki Arcane, he gleefully shot down a race horse. Kubrick used Carey again in Paths of Glory (1957), this time in the sympathetic role of condemned prisoner Private Ferol. Equally impressed by Carey’s work was director John Cassavetes, who gave the actor a leading role in The Killing of a Chinese Bookie (1976). In 1965, Carey spoofed his unsavory screen image in Beach Blanket Bingo, playing leather-jacketed cyclist South Dakota Slim, who expresses his affection for leading lady Linda Evans by strapping her to a buzz saw. He went on to menace the Monkees in Head (1968), bellowing out incomprehensible imprecations as Davy, Mike, Micky and Peter cowered in confused terror. One of his juiciest film roles was as a rock-singing evangelist in The World’s Greatest Sinner (1962), which he also produced, directed, and wrote. In his later years, Timothy Carey occasionally occupied his time as an acting teacher. 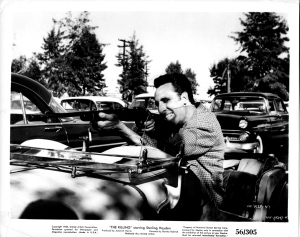