Provocatively disavowing, then, the realist documentary mode, The Killing instead embraces a kind of ironic quotation that repurposes popular genre conventions and formulas. Take, for example, one of The Killing‘s most stingingly cynical moments, the charged scene in which a deranged sniper, played with reptilian charm by Timothy Carey, strikes up an unexpected friendship with an embittered African American war veteran working as a parking attendant, played with smoldering intensity by James Edwards. For a brief moment, the awkward and spontaneous connection between the white and black man almost seems to be directed by the other Stanley of postwar Hollywood – Stanley Kramer, whose trademark brand of overwrought social-problem melodrama would give rise a few years later to The Defiant Ones (1958), a heavy-handed, Oscar-winning allegory of troubled race relations. Yet just as suddenly, Kubrick and über-hard-boiled novelist Jim Thompson‘s screenplay subverts and renders ironic the social-problem formula evoked so effectively, with Carey’s demented killer unleashing a viscously casual racist barb that reveals his seemingly enlightened sympathies to be simply a convenient guise, a mocking echo of the clown mask donned by heist ringleader Johnny Clay (Sterling Hayden) during the climactic robbery. 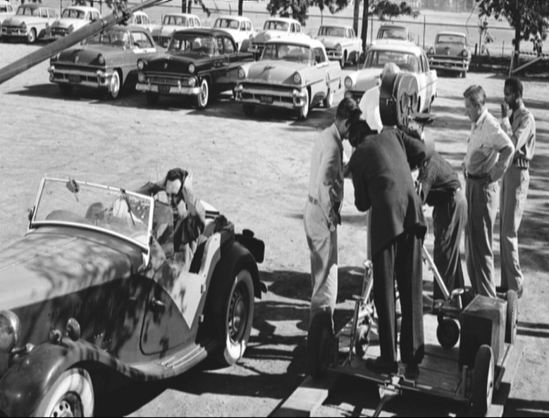 Shooting the parking lot scene, The Killing (1956). James Edwards stands at far right. The fellow all in black with his back to us is probably Stanley Kubrick.