Finger Man, in particular, is a good example of his early work. Carey plays the right hand goon to mastermind pimp/bootlegger Forrest Tucker. Tucker conveys a cunning and diabolical type; Carey, however, defines a true sociopath, unbridled by gangland criminal codes. He is seen roughing up a woman in one scene, moving her around the set as if she were a small piece of cheap furniture. Later in the film, Frank Lovejoy, the hero, turns on Carey with menacing rancor. Carey reveals himself as the coward we know that all bullies are. This sort of scene is familiar to American film; the difference is, Carey drops the bottom out and operates in the realm of pathos alien to American movies of the ‘50s. America likes a winning quality to its losers.

Today’s pic is another from Harold D. Schuster‘s Finger Man (1955). Murderous thug Lou Terpe has finally been brought down by the eponymous “finger man,” Casey Martin (Frank Lovejoy). Cornered and pummeled by Martin, Terpe’s tough-guy act drops and he becomes the sniveling coward he is.

“But just when you’re convinced he’s the ultimate thug,” writes Carl Steward in “Timothy Carey: Noir’s Wildest Card,” “Lovejoy surprises him in an alley and only has to whack him a few times to reduce him to a simpering boob. It’s classic Tim Carey, offering up an unanticipated left turn that stamps his performance as unforgettable.”

Ex-convict Lovejoy is caught by the feds heisting a truck shipment; to keep from gong back to the slams, he works undercover to nail syndicate head Tucker. Lovejoy’s ex-girlfriend and gangster’s moll Castle throws in with Lovejoy and gets murdered by Tucker’s henchman, Carey. In the end, after nearly being killed himself, Lovejoy brings down Tucker’s gang and is allowed to go on his way.

Lovejoy, who played in other noir films such as Try and Get Me, The Hitch-Hiker, and I Was a Communist for the F.B.I. turns in his usual steady, low-key performance. Carey, playing – as usual – a psychotic killer, is as convincingly weird in this film as he was in every other film he ever played, leading one to wonder what he was like in real life.

We close out this rather eventful week with another look at Lou Terpe, the ill-tempered torpedo of Finger Man (1955). His boss, Dutch Becker (Forrest Tucker), is attempting to restrain him from going gonzo on the “finger man” of the title, Casey Martin (Frank Lovejoy).

Lovejoy, from the Bronx, built a solid reputation as a dependable “square-jawed, intense, no-nonsense” type of actor who entered the profession as a teenager, after the stock market crash of 1929 ended his budding career on Wall Street. After stints on Broadway and radio, he made his film debut in 1948. He worked steadily until his death at age 50 in 1962 of a heart attack.

When you line up Carey’s noir work, it’s clear that the idiosyncratic touches he gives his minor characters truly set them apart. In the undervalued Allied Artists cheapie Finger Man (1955), Carey gets quite a bit more screen time… and steals the film from stars Frank Lovejoy and Forrest Tucker as crime boss Tucker’s right-hand goon Lou Terpe. (You have to wonder, did Carey think up his own character names, too?)

In this one, Tim’s still toking the smokes to great effect, but he also incorporates obsessive knuckle-cracking and seems a lot more sinister. He delights in groping women, rearranging their faces in back rooms, even killing them and stuffing them in trunks, as he eventually does to Lovejoy’s squeeze. But just when you’re convinced he’s the ultimate thug, Lovejoy surprises him in an alley and only has to whack him a few times to reduce him to a simpering boob. It’s classic Tim Carey, offering up an unanticipated left turn that stamps his performance as unforgettable. 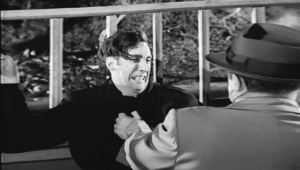 I’m a day behind on our quote for the week, so today you get that and our pic for today, which ties in with the quote. See what I did there?

“Another time I did a show called Finger Man with Frank Lovejoy. They needed some publicity for the show, so I went to the Santa Monica Pier and I was going to be thrown in the water in a trunk in front of the press, but the box was supposed to open up so I wouldn’t drown. But the newsmen wanted to lock it. So I went in but I didn’t lock it and the police came to arrest me. Then the producer John Burrows came and he helped me out. You know, I was always a hound for publicity.”

A while back I said I was going to post this, and now I’m finally getting around to it. This is from Barry Gifford’s great book Out of the Past: Adventures in Film Noir.

I must have first seen Timothy Carey in one of those low-budget 1950s movies, playing a heavy as he does in Finger Man. The first two films I can actually remember him in, however, are One-Eyed Jacks (1961) with Marlon Brando, where he played a stupid, womanpawing thug, his only lines snarls; and one of the idiotic Beach Blanket epics of the early ’60s, with Carey as a drooling, leering goon named South Dakota Slim. Later, of course, John Cassavetes used him in Minnie and Moskowitz and The Killing of a Chinese Bookie, both small roles; but the opening scene in Minnie, the only one shot in New York [Marisa’s note: Actually it was shot in downtown Los Angeles], where Carey monologizes in a diner, is worth seeing the film for. Even in Finger Man he’s nothing more than a snarling brute, but an effective one. And that’s the point: at what he does, Timothy Carey is non-pareil. He’s a bizarre screen presence, a Neanderthal-like hulk in modern dress; frightening.

Carey makes Finger Man interesting. The shots of him stalking Frank Lovejoy, threatening Lovejoy in a restaurant, growling, snarling [Carey is unequaled at The Unbridled Snarl], grabbing women’s arms, attempting to grin, are priceless. He plays a thug, naturally, who works for a crime boss played by Forrest Tucker. Lovejoy is a three-time loser who goes over and cooperates as an undercover man for the Treasury Department in order to avoid going up for life. Lovejoy infiltrates Tucker’s mob of liquor hijackers and nightclub lowlifes, takes up with a former B-girl of Tucker’s and takes The Big Step to turn his life around. He’s also got a psycho-alcoholic sister with a little girl that he tries to save, another refugee from Tucker’s tentacles. Frank Lovejoy was always a flat actor, pretty much dead in the water. It’s not even amusing, really, to watch him interact with Forrest Tucker, another woodenhead, in this one. The women rave and rant and snicker and spark a little, but these guys, along with the Treasury cops, are lifeless…

What transpires according to the script doesn’t mean a thing and is barely worth following. It’s Timothy Carey who takes the cake. He’s spooky, menacing, ugly; a deranged gorilla in a coat and hat. He slobbers, and can’t control his hands or his hair, which keeps falling in his face. Some of the photography here is interesting: low angle approach shots and the odd tilted street keep it visually intriguing. The men in this movie are crude, mean, stupid; the women exploited, stunted, abused. Nothing pretty here except for the stagey ending meant to be scoffed at. Timothy Carey justifies the French intellectual’s image of the typical American male.