It’s time we took another look at the low-budget Western Naked Gun (1956), directed by Edward (Eddie) Dew and an uncredited Paul Landres. Timothy’s hot-headed henchman Hartman has just had a knock-down-drag-out fight and is being escorted off the premises by an unknown extra. 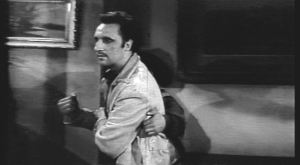 Here’s another of Tim’s early films that is long overdue for a proper commercial release. Let’s get on that, powers-that-be!

Ending the week is another look at Chain of Evidence (1957), the amnesia-plot-device police drama directed by Paul Landres, who co-directed Timothy the year before, along with Eddie Dew, in Naked Gun (1956) but went uncredited. Bad guy Carl Fowler has been called in for questioning on an assault charge, and he is none too happy about it (even though he did it).

Landres was another hard-working journeyman director, helming many low-budget feature films and television series (seemingly specializing in Westerns) from the late 1940s into the 1970s. He also received no on-screen credit for his directing duties, along with the prolific Robert L. Lippert, on the MST3K favorite Last of the Wild Horses (1948), filmed a few hours’ drive from me in the Rogue River Valley in southern Oregon.

Let’s close out the week with another publicity still. This one is from the low-budget Western Naked Gun (1956), directed by Eddie Dew and an uncredited Paul Landres. Timothy is getting his clock cleaned by a determinedly two-fisted Tom Brown.

Many thanks to Toby from 50 Westerns From The 50s for this one! No wonder I missed it; it’s listed as Naked Guns, plural. Pretty bad when the distributor (Associated Film Releasing Corp.) can’t even get the name of their own film right. As I believe I’ve mentioned before, Brown began his career as a child model for advertisements, including Buster Brown shoes. Any relation? You make the call.

Today’s pic is another from Naked Gun (1956), the enjoyable B-Western directed by Eddie Dew, former B-Western player himself. Timothy’s mustachioed henchman Hartman is enjoying a drink and a laugh with his bartender pal Wilson (William “Bill” Phillips). 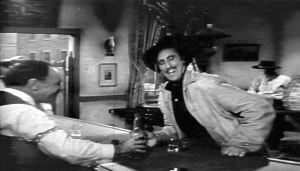 Phillips did scads of character bit parts in films in the 1940s and ’50s. Strangely enough, he was also the director of the San Diego Museum of Man in the late ’50s. His appearance in Naked Gun was one of his last; he passed away in 1957.