Sadly, we have another passing to report. Eternal teen Annette Funicello passed away this morning at age 70, after a long struggle with multiple sclerosis. She and Timothy both appeared in Bikini Beach (1964), Beach Blanket Bingo (1965), and Head (1968), never sharing a scene together, unfortunately. Here is a little something I’ve posted before but bears repeating today. It’s a promotional radio interview by Dick Strout for Head that features both Timothy and Annette in separate interviews.

Annette will always be the queen of that never-ending beach party in the sky. Rest well, and thanks.

Today we’re revisiting Head (1968), directed by Bob Rafelson, written by Rafelson, Jack Nicholson, and The Monkees, and starring the Pre-Fab Four themselves. Timothy is in full froth during the inexplicable “Atta boy Mike” scene.

“You really can’t describe the picture,” Tim told Dick Strout for The Hollywood Report (listen here!). “I read the script and actually it’s the most bizarre film story I ever read before. Each page is another movie. It’s quite unique. I’ve never really been involved – I’ve worked in films before but never any quite as unique as this one. It’s a very hard film to describe… In this picture I played about four different characters. And I didn’t know what I was doing most of the time.”

This week’s video is another that is not really a video at all. It’s the audio of a radio interview Timothy did to promote The Monkees‘ film Head (1968), conducted by Dick Strout for The Hollywood Report. Annette Funicello can be heard here as well.

It’s a rare treat to hear Tim just casually conversing like this. I am eternally grateful to Mike White of The Projection Booth for bringing this to my attention. Tim’s portion of the interview can be heard in TPB’s podcast all about Head which I encourage you to listen to immediately. Atta boy, Mike!

“Nobody walks out on me! Not even myself!”

“You really can’t describe the picture. I read the script and actually it’s the most bizarre film story I ever read before. Each page is another movie. It’s quite unique. I’ve never really been involved, I’ve worked in films before but never any quite as unique as this one. It’s a very hard film to describe. People say, ‘Well go ahead and see the film, you’ll find out.’ This is usually a promotional stunt or something. But in this picture I played about four different characters. And I didn’t know what I was doing most of the time. These Monkees, you know, to be honest, they’re not the most disciplined actors. I remember Davy had to get a hair cut right in the middle of the scene. (laughs) And three of the other actors, they had to walk someplace on top of the roofs to get inspired, they’d lost the feel of it. They just walked off and they came back about an hour later, much to the dismay of the assistant director who couldn’t quite grasp it. They had to replace four assistant directors; they broke down, they just couldn’t take anymore because of the Monkees’ antics and carrying on. I mean it was just impossible sometimes, but of course this is the Monkees and this is what makes their talent so unique and so great. It was strictly a picture for the Monkees. I’m sure their fans all over the world will really love this show, you know, because it’s so outstanding. It makes Tiny Tim look like a Sunday school teacher.”

– Promotional radio interview for Head with Dick Strout for The Hollywood Report, 1968

These two fellas wrote an article about me, David Newman and Robert Benton. These are the fellas that wrote the exciting picture Bonnie and Clyde. Much to my surprise, my brother called me up from New York back in 1965 and said, ‘Tim, you’re in Esquire.’ I said, ‘You’re kidding, what do they want me in Esquire for?’ Anyway, there’s a picture of John Wayne and a picture of myself, and the caption above it was ‘The Old Sentimentality vs. the New Sentimentality.’ Under John Wayne’s picture they had ‘Old Sentimentality’ and under mine they had ‘New Sentimentality.’ And they said ‘It happens that an actor,’ and they said a bit actor too, which I didn’t like. Anyway, they said that ‘Tim Carey is our new underground celebrity.’ They said I was dirty, now, they said I was uncouth. (laughs)

– Promotional radio interview for Head with Dick Strout for the “Hollywood Report,” 1968 (pic from the Psychotronic interview)

Most of my roles, I’ve tried to make them diversified. In trying to make them diversified, I didn’t get along with certain directors. Unfortunately I hold the all time record, I’m not proud of it but it’s a fact. I was asked to leave the set five times in a row. I guess I didn’t read that book How to Make Friends and Influence People [sic]. But it was a lot of fun. I’m the scourge of Hollywood. I remember an agent said to me, and it’s the truth, when he mentioned my name to some casting director, the casting director just fell across the director’s lap and fainted, he was so shocked by the fact that he mentioned Timothy Carey, you know. But I’ve been getting along with people now.  I’ve been, you know, just sitting in my dressing room getting ready for the scene. As I told one of the assistant directors on my last picture, he gave me a very small dressing room, and I said, “You don’t know my history as an actor, do you?” And right away I got a better dressing room.

– Promotional radio interview for Head with Dick Strout for The Hollywood Report, 1968 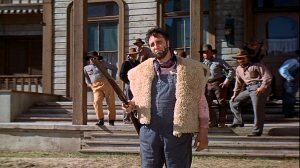