Today we take another look at The Last Wagon (1956), directed by Delmer Daves. This is a great shot of Timothy as bad guy Cole Harper, set against beautiful Red Rock Crossing in Sedona, Arizona.

Daves’ law degree from Stanford University ended up collecting dust after the film bug bit him while still in college. He often wrote, produced and directed his own films (much like someone else we know!). Westerns were nearest and dearest to his heart. 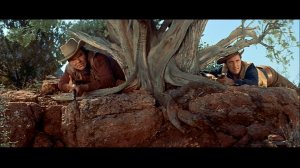 As I’ve mentioned previously, my MSTie friends will no doubt recognize Mathews from his role as the put-upon guardian angel of the short X Marks the Spot (1944). He turned in many fine performances, mostly on television in the 1950s and 60s. Off-screen he was an avid chess player.

Today we take another gander at The Last Wagon (1956), shot in Arizona by director Delmer Daves. Tim and George Mathews are on the trail of Richard Widmark‘s Comanche Todd.

My MSTie pals will recognize Mathews as the overworked guardian angel of the short X Marks the Spot (1944). He enjoyed a long career on the stage and in movies and television.