This week’s video is the trailer for Curtis Harrington‘s favorite of all of his films, What’s the Matter with Helen? (1971). Timothy is briefly glimpsed as the panhandling bum who gives Debbie Reynolds quite a scare.

Also featured are Shelley Winters, Dennis Weaver, Pamelyn Ferdin (quintessential child star of the ’60s and ’70s and the voice of Lucy in most of the early Charlie Brown television specials), and the flamboyant Irish theatrical powerhouse Micheál MacLiammóir. Harrington was a proud Careyphile and spoke highly of Tim in his autobiography. Enjoy!

As we know, Harrington was very fond of Timothy, calling him “my favorite bogeyman”. They worked together once more after this film, in the Baretta episode “Set Up City” (10.29.75).

We head up the week with a shot from Vincent Sherman‘s amiable Western comedy The Second Time Around (1961) for the fourth or fifth time around on the blog. This one is another publicity still. Masked bad guy Bonner manhandles Lucretia Rogers (Debbie Reynolds), as Aggie Gates (Thelma Ritter) tries to prevent further mayhem.

Ms. Ritter, like Tim a Brooklyn native, was simply one of the greatest character actors ever, bar none. Her wry, wise-cracking presence enlivened many a classic film, from Miracle on 34th Street (1947) to All About Eve (1950) to Pickup on South Street (1953) to Rear Window (1954) and beyond. She was nominated six times for the Best Supporting Actress Academy Award, and never won. “Now I know what it feels like to be the bridesmaid and never the bride,” she said about this unfortunate turn of events. Shame on you, Oscar.

Today we revisit Curtis Harrington‘s What’s the Matter with Helen? (1971), a gem of a film if ever there was one. Harrington, a humongous Careyphile, insisted on Timothy for the brief but memorable role of the bedraggled tramp who hits up Debbie Reynolds for a hand-out in Depression-era Hollywood.

I am currently reading and greatly enjoying Harrington’s long-awaited (and posthumous, unfortunately for us) autobiography, Nice Guys Don’t Work in Hollywood: The Adventures of an Aesthete in the Movie Business. In fact, I’ve already used a couple of his observations about Tim for Quotes of the Week. Please do yourselves a favor and check out this book (and his short film collection while you’re at it); I predict you won’t be disappointed!

I had my heart set on Timothy Carey to play the tramp who asks Debbie [Reynolds] for a handout [in What’s the Matter with Helen? (1971)]. He was notoriously difficult to deal with and had an aggressive personality that frightened many people. Most producers didn’t want to work with him, but to the many creative directors who loved him – like Kazan, Cassavetes, and Kubrick – he was unique and irreplaceable. I was one of those directors. I ordered Caro [Jones, casting director] to offer him the part and make a deal with him. Still, there were a few sticky moments. One day she called me in terror to tell me that Timothy had warned her that he owned some vicious dogs and that if he didn’t get the part he would let them loose on her! I calmed her down and she made the deal.

– Curtis Harrington, Nice Guys Don’t Work In Hollywood: The Adventures of an Aesthete in the Movie Business (Drag City Incorporated, 2013) 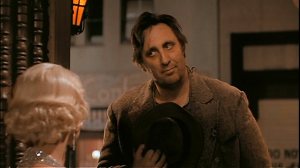 Today it’s time for another look at the Curtis Harrington-directed shocker What’s the Matter with Helen? (1971). Timothy is briefly but memorably seen as a panhandling tramp in 1930s Hollywood. Here he thanks Adelle (Debbie Reynolds) and her beau Linc Palmer (Dennis Weaver) for their generosity and for “giving a damn.” 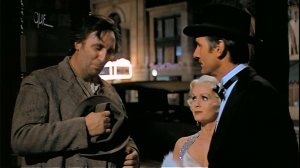 Tim had worked with both Reynolds and Weaver previously – with Reynolds in The Second Time Around (1961), and with Weaver in the Gunsmoke episode “The Gentleman” (6.7.58). He would work with him again the following year in the McCloud episode “Fifth Man in a String Quartet” (2.2.72). If Tim hadn’t been fired from Ralph Nelson‘s Duel at Diablo (1966), that would have made four times he’d worked with Weaver.

Our first pic for the week checks back in with Vincent Sherman‘s The Second Time Around (1961), the amiable Western comedy starring Debbie Reynolds, Steve Forrest and Andy Griffith. Timothy appears as bad guy Bonner, looking menacing as he sucks on a cancer stick, dagger tattoo and all. 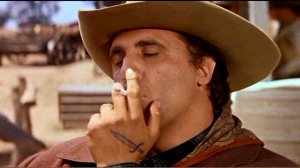 I’m sure I’ve mentioned several times that it was during the making of this film that Tim encountered a young untried composer by the name of Frank Zappa and hired him to write the orchestral score for The World’s Greatest Sinner (1962).