GL: No offense, Tim, but did you ever drink a lot or use drugs?

TC: No, I’m a teetotaler. I never even smoked. People were always offering me grass or cocaine. I got my own cocaine – my own personality. I AM COCAINE. What do I need that stuff for?

GL: So, basically, you didn’t have any vices at all?

TC: Oh, yeah – I loved gambling and women. I used to live in Watts and go with black women all the time.

GL: All I have to go on is a list of your pictures and some wild stories I’ve heard around town. For instance, did you once tie up Otto Preminger in his office to get a role?

GL: … throw a snake into a closet where Ray Dennis Steckler was loading a camera, on the shoot of The World’s Greatest Sinner?

GL: And there’s this infamous screening of Sinner at Universal, where you stood by the door with a baseball bat and wouldn’t let the executives out.

TC: Naw, that’s one of the stories Cassavetes loved to tell, but we didn’t even screen the picture. We were up there to discuss a project of mine that John was promoting, a TV thing called “A.L.,” which is L.A. in reverse. But, no, I don’t use tactics like that. But my menace was my idea. I said, “When I work, nobody sits down and relaxes.” Cassavetes said it scared Ned Tannen. He and Danny Selznick were the ones who were there at the meeting. 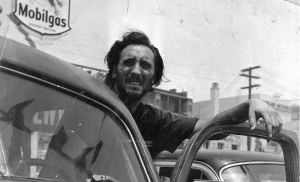 Timothy during the unfinished shoot of his own version of his script A.L., 1956