We start the week with another look at Bloodhounds of Broadway (1952), directed by Harmon Jones. Timothy is uncredited but memorable as hillbilly Crockett Pace, who doesn’t cotton to strangers on his property. 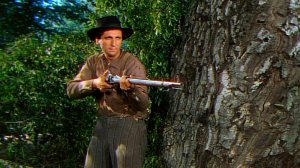 Bloodhounds is a musical based on the story of the same name by Damon Runyon. The characters are blessed with all those fabulous Runyonesque names, like Numbers Foster, 52nd Tessie, Poorly Sammis, Dave the Dude, Ropes McGonigle, Lookout Louie, Curtaintime Charlie, etc. Interesting that Tim had originally hoped to become a singer, but was told he was tone deaf; he went into acting instead. It would have been great to see him sing in a musical, tone deaf or not.

Our pic for today features Tim in one of his first speaking roles. Bloodhounds of Broadway (1952) was a musical comedy directed by Harmon Jones and based on the writings of Damon Runyon, who co-wrote the screenplay. Tim unfortunately (or fortunately, depending on your point of view) doesn’t get to sing, but he does make an impression in the uncredited role of Crockett Pace, Mitzi Gaynor‘s hillbilly suitor. 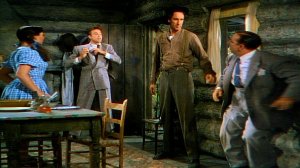 He is about to get spectacularly punched out by fellow Brooklynite Scott Brady, brother of Lawrence Tierney, who later became a good friend of Tim’s.