As we saw in Shadows, [John] Cassavetes conflates the actors’ acting strategies with the characters’ interactional strategies. As actors, Tim Carey (Morgan) and Val Avery (Zelmo) take refuge in identities that have been worked up and packaged into predictable, mechanical routines before their scenes even begin, much as the characters they play do in their lives. [Seymour] Cassel gives us acting as improvisatory collaboration. As an actor, Cassel discovers his purposes as he goes along in the same way Moskowitz does as a character. Carey’s and Avery’s forte, as actors, is their ability to hold forth and dominate a scene with the power of their personalities; Cassel’s is his ability to listen, to respond to, to interact with another person. It’s not accidental that Seymour’s (and Cassavetes’) ultimate putdown in the film is to say that someone “has no sense of timing.” Timing is something that involves more than one person. To care about timing is to care about relationship. 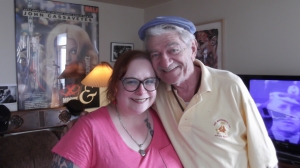