I apologize for not posting last week! Not sure what happened. Guess I needed a little break. In any case, March is coming in like a lion with another look at Alaska Seas (1954), the maritime adventure directed by Jerry Hopper. Boat repairman Wycoff ponders how to get the $920.60 owed him by rogue fisherman Matt Kelly (Robert Ryan). 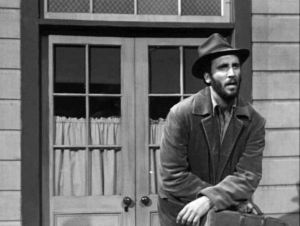 I was inspired to make Seas our Pic of the Day after coming across this epically hilarious promotional still from the film on eBay. One is inclined to wonder why Timothy was not included in this fabulous shot of Brian Keith, Jan Sterling and Ryan hamming it up for the camera. 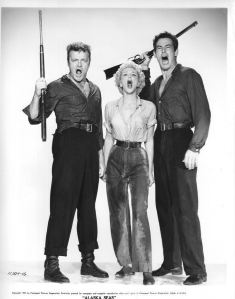 Today we take another look at Jerry Hopper‘s maritime adventure Alaska Seas (1954). Boat repairman Wycoff is still trying to get his $920.60 from Matt Kelly (Robert Ryan), as Jim Kimmerly (Brian Keith) looks on. 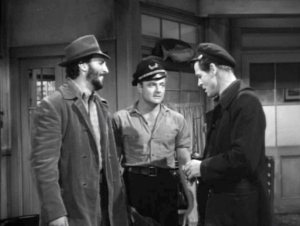 Many of us are probably most familiar with Keith from his role as Uncle Bill in the classic sitcom A Family Affair (1966-1971). He was, however, a reliable presence in many films and television shows from the 1950s until his death in 1997. He even appeared in two silent films at the age of three. His stepmother was starlet Peg Entwistle, who gained notoriety as the girl who committed suicide by jumping off the “Hollywoodland” sign in 1932. His own passing was also under very sad circumstances. Suffering from emphysema and terminal lung cancer, and mourning the suicide of his daughter only ten weeks earlier, he too took his own life at the age of 75. 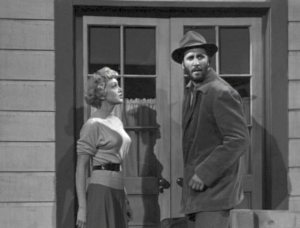 This nifty little film is available on Netflix Streaming, as well as on non-commercial DVD at Loving the Classics, so check it out!

I also wanted to let you all know that the blog will be going on hiatus for the rest of the week. We’ll be back on September 30, my wedding anniversary and the anniversary of the death of James Dean. So stay tuned!