Carey was certainly attracting the right kinds of people with such skewed antics. In 1956, Stanley Kubrick gave Carey the role of racist horse-killer Nikki Arane in The Killing and the court-martialled French private Ferol in Paths Of Glory (1957). They remain two of the most powerful, sinister and haunted performances in all of Kubrick’s films.

Yet, it’s once we stray off the path of conventional film-making and into the murky world of the B-movie that Carey’s true genius reveals itself. Alongside junk cinema king Peter Graves, Tim Carey appeared in Harold Daniels‘ Poor White Trash (1961) [ed. note: originally released as Bayou in 1957] as Ulysses, a mean-eyed Cajun loon. The film’s highlights include Carey performing the most disturbing inbred zydeco dance ever committed to celluloid, then attacking Graves with a very big axe. […]

We received this additional info on Carey from his second cousin once removed. Thanks Susan!

“My Dad remembers playing with Tim in Brooklyn as a kid… he said he was a funny guy way before he headed to California… used to go out in the street with a flute and play it while directing traffic. They also used to mess around with a dumbwaiter hoisting each other up and down.” 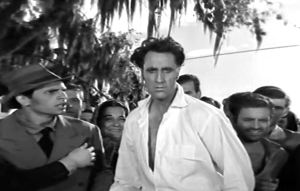