Today we celebrate the 50th anniversary of the release of William Asher‘s Beach Blanket Bingo (1965)! And how we do that around here is by revisiting that pool-cue-slinging ne’er-do-well, South Dakota Slim. Slim has just been overcome by a cloud of chalk dust thoughtlessly propelled into the air by Eric Von Zipper (Harvey Lembeck).

Bingo was the fourth in Asher’s beach opus quintet, which also includes Beach Party (1963), Muscle Beach Party (1964), Bikini Beach (1964), which includes Slim’s first appearance, and How to Stuff a Wild Bikini (1965). We’ve just discovered that Asher first directed Timothy in an episode of Invitation Playhouse: Mind Over Murder entitled “The Last Act,” first airing on May 14, 1952. It’s at the top of my list of lost Careyana.

On this date twenty years ago, Timothy passed away. It’s hard to believe it’s been twenty years already. However, though his corporeal form has left us, his spirit remains, as vital and larger-than-life as ever. For someone I never actually met, he certainly has essentially taken over my life. And I’m perfectly fine with that. Here is his obituary, as it appeared in the New York Times on May 17, 1994.

Timothy Carey, a character actor whose films ranged from Paths of Glory and One-Eyed Jacks to 1960’s beach movies, died on Wednesday at Cedars-Sinai Medical Center. He was 65.

His son Romeo announced the death on Sunday and said the cause was a stroke.

Timothy Carey’s acting career began with a part in Billy Wilder‘s 1951 movie The Big Carnival [aka Ace in the Hole] and included more than 50 feature films and many television roles.

He often played a villain. Two of his most recognized roles were in Stanley Kubrick films, The Killing (1956) and Paths of Glory (1957). He acted in One-Eyed Jacks (1961) with Marlon Brando and in John Cassavetes‘ Killing of a Chinese Bookie (1976).

Mr. Carey wrote and directed himself in The World’s Greatest Sinner, in 1962.

In addition to his son Romeo, he is survived by his wife, Doris, and five other children, Mario, Velencia, Silvana, Dagmar and Germain.

And since it’s Mother’s Day, here’s Tim and his mom.

Turner Classic Movies seems to be in the middle of a beach party movie marathon today. They will be showing Bikini Beach (1964) and Beach Blanket Bingo (1965) very shortly, so get those DVRs fired up! You don’t want to miss a minute of South Dakota Slim and his antics. See you at the bubbie house, bubbies!

Blonde and beautiful Ms. Nelson essayed the role of Puss in several of the beach party movies of the 1960s. In fact, she appeared in just about all of them in one role or another. She was also a semi-regular on The Andy Griffith Show for several years. She retired from acting in 1970, and passed away from throat cancer in 2006 at the age of 68.

It’s the first day of summer, so let’s go to Bikini Beach (1964)! Or, we could just stay in and play pool with South Dakota Slim and his pals The Teenage Werewolf Monster (Val Warren), J.D. (Andy Romano), Puss (Alberta Nelson), and Eric Von Zipper (Harvey Lembeck).

Fellow Brooklyn boy Lembeck made Von Zipper an unforgettable presence in pretty much all of the William Asher/Don Weis-directed beach party movies of the 1960s. He paid his dues on the stage and in supporting roles in many military comedies of the 50s before hitting the big time on The Phil Silvers Show. His son Michael is an accomplished film and television actor and director, and his daughter Helaine is the artistic director of the Harvey Lembeck Comedy Workshop. Harvey passed away of a heart attack in 1982 at the age of 58. His gravestone reads “He Loved – He Laughed – He Lives”.

Sadly, we have another passing to report. Eternal teen Annette Funicello passed away this morning at age 70, after a long struggle with multiple sclerosis. She and Timothy both appeared in Bikini Beach (1964), Beach Blanket Bingo (1965), and Head (1968), never sharing a scene together, unfortunately. Here is a little something I’ve posted before but bears repeating today. It’s a promotional radio interview by Dick Strout for Head that features both Timothy and Annette in separate interviews.

Annette will always be the queen of that never-ending beach party in the sky. Rest well, and thanks.

As winter approaches, what better place to revisit than the beach? Bikini Beach (1964), directed by William Asher, marked the first of Timothy’s two appearances as South Dakota Slim. Slim is a very strange pool player with (as we discovered the following year in his next outing, Beach Blanket Bingo, also directed by Asher) some very strange hobbies. Here he is asking the Teenage Werewolf Monster in the pool parlor (Val Warren) if he’d be up for a game during the next full moon.

Warren had won first prize that year in Famous Monsters of Filmland magazine’s horror make-up contest (second prize went to a young man named Rick Baker). He got to wear his prize-winning werewolf make-up in the film (and appear with Tim – pretty sweet deal if you ask me). He was a talented writer, illustrator, and sci-fi/fantasy enthusiast. He passed away in 2011.

We learned yesterday of the death of veteran film and television director William Asher at age 90. He directed Timothy in Bikini Beach (1964) and Beach Blanket Bingo (1965), bringing South Dakota Slim to teenage audiences everywhere. Here, in the latter film, Slim is hatching a plot with Boots (Myrna Ross) and Puss (Alberta Nelson) to get rid of the annoyingly perky Sugar Kane (Linda Evans). “Leave it to ol’ Slim. I got ideas, and they’re all vile, baby!” 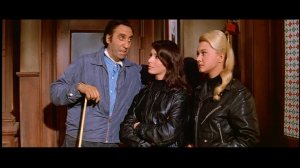 Classic television just wouldn’t have been the same without Asher’s myriad contributions. Rest well, sir, and thanks.

As we near the end of May, our hearts lightly turn to thoughts of summer. Well, up here in the Northern Hemisphere at least. I have already recommended Bikini Beach (1964) and Beach Blanket Bingo (1965) on these pages for mindless summer fun, with Timothy’s pool-cue-slinging South Dakota Slim as an added bonus (and as we all know, the best thing in both movies). To reinforce that idea, we present the closing credits of Beach Blanket Bingo as our Video of the Week.

Slim has been overtaken by the voluminous cloud of billiard chalk created by Eric Von Zipper’s (fellow Brooklyn boy Harvey Lembeck) tendency to overdo things. Tim’s son Romeo once said in an interview that his father was a big fan of silent movies. As Buster Keaton has a cameo here, I like to think that Timothy got to indulge in a huge fanboy moment, sitting down with Buster and enjoying a long talk about the good old days of Hollywood.

Our pic for today (and need I remind you to click to embiggen?) is a rather beautiful shot of Timothy as hateful Tiller Evans in the Gunsmoke episode “The Gentleman,” first airing on June 7, 1958. He has just gotten punched out by Marshal Dillon (James Arness) for being abusive towards Boni Damon (Virginia Baker), hostess at the Long Branch Saloon. Boni will soon be finding solace with “the gentleman” of the title, dapper Marcus France (Jack Cassidy). 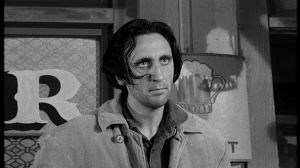 Tim had worked the previous year with Baker’s then-husband, Jack Palance, in House of Numbers. Also the previous year, he got punched out by Arness’ brother, Peter Graves, in Bayou. Hollywood’s a small town!