This was a question posed to me not too long ago by a friend; too many drinks and joints in while surveying his collection of rare films and memorabilia. To tell the truth, I didn’t know what the hell he was talking about, and could only stare back at him with a kind of slack-jawed goggle reserved for Alabama rats attempting to study astrophysics. In turn, my friend quickly dropped down to the floor, mumbling about some article in Psychotronic Video as he threw the cabinet of his entertainment center open, revealing a gaggle of VHS tapes, imported DVDs, and even spindles of DVDr recordings of late night TCM showings. From one of the spindles came a disc, probably buried six or seven deep, with the words “World’s Greatest Sinner” crudely scribbled on it with a black Sharpie. For a second I was semi-stressed, as neither of our wives were present, and I feared I was going to get exposed to some kind of super sick snuff flick he had hidden amongst bootlegs of forgotten Warren Oates roles.

Instead, what I got was entranced by the first forty-five minutes of arguably one of the strangest, most fascinating bits of cinema I’d ever laid eyes on. Dubbed by some as one of the “worst films ever made”, WORLD’S GREATEST SINNER was the work of one Timothy Carey, a Brooklyn born character actor who was attempting to produce, write and direct what he considered to be a “truly controversial” film. The story of a suburban everyman who becomes a rock megalomaniac, WORLD’S GREATEST SINNER is undoubtedly odd, but also hypnotic in its purpose; a kind of counter-culture document made before the term “counter-culture” was even part of our pop culture vernacular. And while it practically ruined his career in 1962, WORLD’S GREATEST SINNER has come to find a ROOM-like cult amongst psychotronic film fans*, because underneath the film’s seemingly inept veneer is an odd commentary on race and religion the likes of which were unheard of in the late 50s and early 60s. 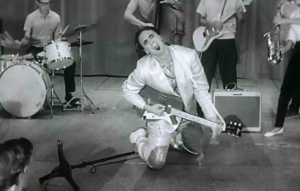 Hey gang, I apologize for slacking on posts lately. I’ve been feeling a bit under the weather the past few days. However, I couldn’t pass up the opportunity to tell you about the upcoming 35mm screening of The World’s Greatest Sinner at the famous Alamo Drafthouse in Austin, Texas!

“Grab the snake, sip the blood, and sacrifice yourself to the inhuman artistry of Timothy Carey’s visionary blue-collar epic. After all, you don’t want to anger God, do you?” 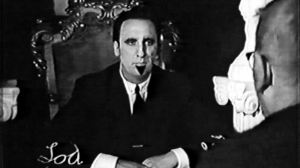