This week’s video accompanies the wonderful article by filmmaker Andre Perkowski (and was also created by him) that provided our Quote of the Week last Sunday. It comprises scenes from Timothy’s last television appearance in the Airwolf episode “Tracks” (3.22.1986) overlaid with the audio from Morgan Morgan’s near-soliloquy from Minnie and Moskowitz (1971). The result is surrealism at its finest. Enjoy!

Timothy Carey. The face. The jowls. The unshaven stubble. Those teeth. How he stood. How he walked… and fuckin’ hell, how the man talked! Oozing his way across screens, TV, and drive-in… big movies, tiny oddities, TV appearances.

Was Ernest Borgnine gunning him down in “Airwolf” once? I’m pretty sure that happened. He gave off the impression of smelling like an egg and pepper sandwich, or even a chain-smoking gravedigger in the words of one onlooker to his crazed career.

His appearances in Kubrick films always fascinated me as this was clearly a character who played by his own highly idiosyncratic, possibly hypocritical rules — who operated from a revised script that existed only in his head, occupying a parallel film universe to characters he’d share the screen with.

Drawing attention to himself with little twitches and odd ticks — you couldn’t help but stare at him. He stole every scene he was in just by breathing heavily… Then came his work with Cassavetes, another genuine celluloid crazy who did things his way. Obviously they got on great for a while and sweated through several films together.

I’d heard about The World’s Greatest Sinner for years without getting hold of a copy. In the interim, his other acting roles and interview in Psychotronic were fetishized to a terrifying degree… Then: a breakthrough. My chance finally came when his son Romeo presented a print at the Egyptian Theater. I was inexplicably sitting behind Poison Ivy and Lux Interior of The Cramps when the film began to go through the projector and without a doubt it changed my life. Or were they there a little later at a Maria Montez night?

These life-changing, namedropping experiences happen thick and fast in retrospect and begin to stick to each other like filthy magazine fragments in the gutter. 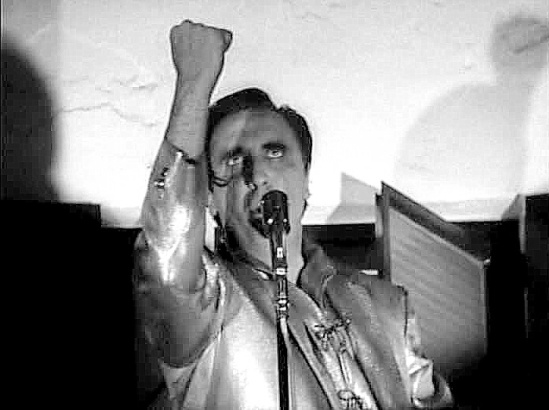 Kicking off the week is another look at the Airwolf episode “Tracks,” first airing on March 22, 1986. Prof. Paul McClelland, aka “The Cat Man,” is picking off folks he considers a threat to mountain wildlife with a rather fearsome hunting bow. It was Timothy’s last television appearance. 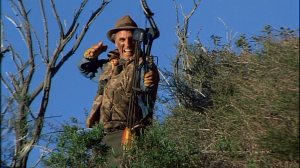 This post is “dedicated” to a most loathsome individual who shall remain nameless.

The final days of 2014 see us revisiting the Airwolf episode “Tracks”. Timothy’s final television appearance first aired on March 22, 1986. As self-styled wildlife protector “The Cat Man,” Tim gets lots of mostly silent screen time and many good close-ups as he meanders maniacally through the mountains. (Alliteration for the win!) 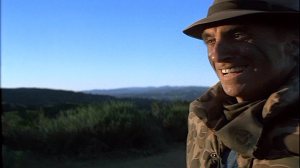 In the director’s chair for this episode was veteran film and television stunt man Ron Stein. He’s been in the business since 1964 and was still doing stunt work as of 2013. That’s dedication for you right there. His work on Airwolf alone brought him a Stuntman Award on the very day this episode was broadcast.

It may seem silly, but the passing last night of feline internet legend Colonel Meow has me in a deep funk. As one of his many loyal minions, I wanted to honor him today by posting another pic from the Airwolf episode “Tracks.” It first aired on March 22, 1986, and was Timothy’s last television appearance. He portrays eccentric Professor Paul McClelland, the local legend known as “The Cat Man.” Unfortunately, the professor ventures far beyond eccentricity when he goes to murderous lengths to protect the wild mountain cats that he loves and considers family. 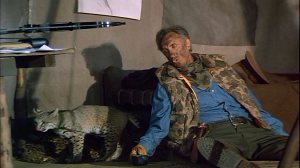 Tim was a great lover of animals, both on-screen and off. I’m sure that he too would be mourning the passing of the Colonel. We raise a glass of scotch in your honor, Colonel Meow. May you gather even more minions beyond the Rainbow Bridge and find grand success in a slight paradigm shift – afterlife domination.

Today’s pic is another from “Tracks,” the Airwolf episode that first aired on March 22, 1986. In Timothy’s last television performance he portrays Prof. Paul McClelland, aka “The Cat Man,” an unbalanced recluse who protects the wild mountain cats he loves with a gigantic hunting bow. 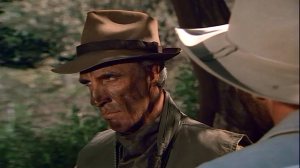 The actor with his back to the camera is John Dennis Johnston, veteran character actor since the 1970s. He seems to specialize in shady characters and authority figures, mostly on TV but in film and on stage as well. He was declared legally blind in 1995, but he’s still hard at work.

Today’s pic is another from the Columbo episode “Fade In to Murder,” first airing on October 10, 1976. Sandwich slinger (and apparent frustrated actor) Tony is waxing eloquent, but his television producer friend Clare Daley (Lola Albright) is having none of it. “You’re always auditioning for me, Tony!” she declares exasperatedly. All she wants is her sandwich – which unfortunately she does not get. 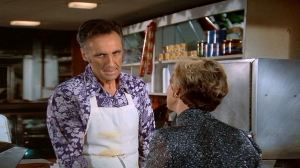 Albright enjoyed a long career in Hollywood as a talented, sexy blonde star and a sultry singer, most notably on the Peter Gunn television crime drama. She appeared in many of the same TV series that Tim did, including Racket Squad, Gunsmoke, Rawhide and The Man from U.N.C.L.E. Her last television role, like Tim’s, was on Airwolf. She is now enjoying retirement in California.