Our (late) pic of the day is another from Rumble on the Docks (1956), the teenage On the Waterfront directed by Fred F. Sears. Timothy turns in a great supporting performance as Frank Mangus, the lackadaisical muscle behind racketeer Joe Brindo (Michael Granger). 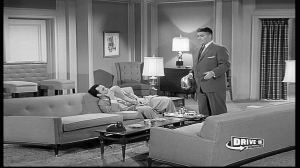 Frank is incapable of merely sitting on a couch or a chair – he must drape himself across it, over it, or around it. It’s pretty much a running gag throughout the film. Yet another part that could have been routine and forgettable in the hands of a lesser talent, here given the unmistakable Carey treatment.

One response to “Pic of the Day: “Rumble on the Docks” revisited”