Happy New Year, everybody! Let’s kick off 2015 by taking another look at the Kung Fu episode “Ambush,” first airing on April 4, 1975. Grumpy outlaw Bix Courtney is after a stash of silver in the possession of saloon owner Jennie Malone (Rhonda Fleming). 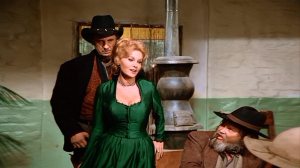 One of the most beautiful and talented stars ever to grace film and television screens, Ms. Fleming, a Los Angeles native, was seemingly born to be in pictures. The story goes that the cameraman on one of her films decided to play a little joke and deliberately photograph her badly, just to see if it could be done. Apparently, it couldn’t. No matter how much he screwed it up, the red-headed star still came out looking amazing. She is also quite a good singer.

One response to “Pic of the Day: “Ambush” revisited”