He was expelled from five schools in his native Brooklyn, the Marine Corps and nearly every job he’s tried while hitch-hiking across the country. He’s slept in vacant lots and cellars. Despite the fact he works regularly in Hollywood, he bought a four room house 25 miles away in a poor section of the city.

“People are finally beginning to understand me,” barked Tim. “The trouble is, people in Hollywood never saw a guy like me before. They think I’m a man from another planet.”

Tim stands 6-feet-4 and has a mop of black hair hanging over his angular face. His behavior is so unruly that when I talked to him in a restaurant I often wished I was elsewhere. Carey kept jumping up to shout his answers and even demonstrated a sensual dance he does with a live cobra between pictures in little bistros downtown.

“I’ve been in and out of more jails on vagrancy charges – the police always arrest me on suspicion because I look suspicious,” said Tim.

“When I was little I had an insane desire to wear a uniform so I forged my way into the Marine Corps. My mother and father both worked – I wanted attention.

“Why are people afraid of me? One producer thought I was on dope. I don’t even drink or smoke. I’m just enthusiastic,” said Timothy Carey. “I don’t need any stimulation.” 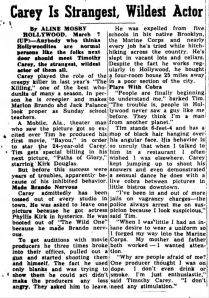 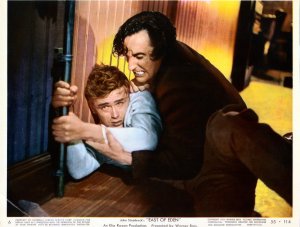