Today’s pic is another from Timothy’s fleeting, uncredited appearance as the drunken denizen of a tawdry flophouse in Daniel Mann‘s I’ll Cry Tomorrow (1955). He’s sidling over to get a better look at that biopic’s subject, Broadway star Lillian Roth (Susan Hayward), passed out on a bed and at a very low point in her tragic life. 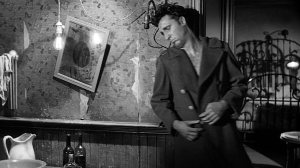 Mann, another Brooklyn native (along with Tim and Hayward), had a special rapport with actors, often drawing out some of their best performances. This could be due to the fact that he had been acting himself since childhood. After studying with legendary acting teacher Sanford Meisner, Mann became one of the first instructors at the Actors Studio. He enjoyed a long career directing some of our finest actors on stage, in films and on television.