And now for a long-overdue look at the rude and probably racist grocery manager of Change of Habit (1969), Elvis Presley‘s last feature film. He has just realized that the mild-mannered nun he just sold a mop handle to is in fact his crusading nemesis, Sister Barbara (Jane Elliot). 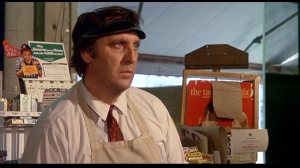 Timothy was directed here by the late William A. Graham, who also guided him through Waterhole #3 (1967) and The Name of the Game episode “Fear of High Places” (9.20.68).