Today’s pic gives us another look at Hilb, the (literally) gold-digging outlaw of Waterhole #3 (1967), directed by the late William A. Graham. Hilb wants to shoot something (or someone), and is unhappy that Sgt. Henry Foggers (Claude Akins) is preventing him from doing so. 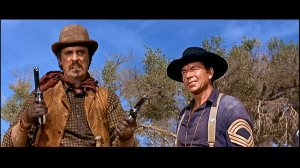 “This was really demanding as I had to play a part-goat, part-human type,” Timothy once said of his role as Hilb. “I would react by making the sound of a goat to reflect different moods. There was a simplicity about that role that I liked.”