In honor of today being the 115th birthday anniversary of Elia Kazan, Timothy recounts an incident that took place during the filming of his fight scene with James Dean in East of Eden (1955),

Elia Kazan, the master realist, began to get nervous, though. He yelled, “Cut,” and called me over.

“Now take it easy, Carey,” he told me. “We won’t have this actor very long if you keep this up.”

So I took it easy in the next few takes. Then we had a short break and went over to Kazan. Jimmy put his arm around Kazan, and said, “I don’t know, Gadge. I don’t get the feeling. Why doesn’t Tim really open up on me?”

Again, I cut loose. I was flabbergasted. Jimmy seemed like he wanted to be tortured. Me, I was bewildered. I was afraid I’d get thrown out of the picture.

“You’d better take it easy, Tim,” he said. “I know you’re a good actor, but don’t over-do it. Kazan is sensitive.” 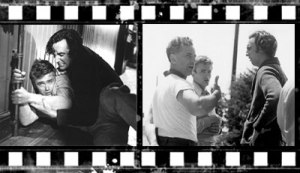 One response to “Quote of the Week”