It’s time to take another look at “Quaker Girl,” the episode of Gunsmoke that first aired on December 10, 1966. It’s the second of two episodes of the legendary Western series in which Timothy appears. Charles “Buster” Rilla is the hulking muscle behind a couple of gold-hungry outlaws. 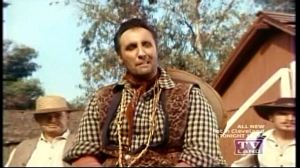 Tim was directed for the second time here by the prolific Bernard L. Kowalski, who memorably let Tim have his head with his characterization of gangster Matty Trifon in the Baretta pilot, “He’ll Never See Daylight” (1.17.75).