Ending the week is another look at “Fortune City,” the episode of It Takes a Thief that was first broadcast on February 2, 1970. Creepy Art makes a pass at kidnapped Mona (Stefanie Powers), unaware that series protagonist Alexander Mundy (Robert Wagner) is lurking in the rafters. 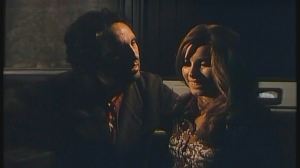 Powers, a Hollywood native, has been gracing films and television since 1960. She is a great champion of wildlife preservation, and is the founder of the William Holden Wildlife Federation in honor of her life partner of many years. She and Wagner went on to create one of television’s most delightful and enduring partnerships in the series Hart to Hart (1979-1984).

One response to “Pic of the Day: “Fortune City” revisited”