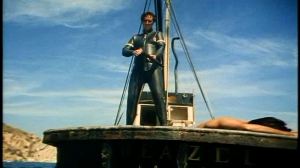 Lamb fared much better as the director of underwater cinematography on television (Sea Hunt and Voyage to the Bottom of the Sea) than he did as a film director, unfortunately. After Mermaids, he produced and directed forgettable low-budget sleaze, finally hanging it up in 1986. He passed away 20 years later.

2 responses to “Pic of the Day: “Mermaids of Tiburon” revisited”