Let’s close out the week with another publicity still. This one is from the low-budget Western Naked Gun (1956), directed by Eddie Dew and an uncredited Paul Landres. Timothy is getting his clock cleaned by a determinedly two-fisted Tom Brown. 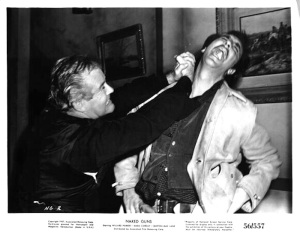 Many thanks to Toby from 50 Westerns From The 50s for this one! No wonder I missed it; it’s listed as Naked Guns, plural. Pretty bad when the distributor (Associated Film Releasing Corp.) can’t even get the name of their own film right. As I believe I’ve mentioned before, Brown began his career as a child model for advertisements, including Buster Brown shoes. Any relation? You make the call.