Our pic of the day takes another look at the Tenspeed and Brown Shoe episode “The Treasure of Sierra Madre Street”. It was first broadcast on June 20, 1980. Escaped axe murderer Obituary Bob terrorizes Lionel Whitney, aka “Brown Shoe” (Jeff Goldblum), and Judge Alice Rynkoff (Lynn Carlin) in his own inimitable fashion. 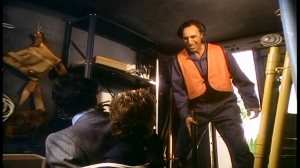 Ms. Carlin is another John Cassavetes alum, having made her film debut in his seminal work Faces (1968). At the time she was Robert Altman‘s secretary at Screen Gems. Cassavetes was working on the Faces script at the same studio, and Ms. Carlin often assisted him with line readings. He ended up casting her in the film, in the role of John Marley‘s neglected wife, for which she received a well-deserved Best Supporting Actress Academy Award nomination. Unfortunately, her subsequent career did not quite live up to this auspicious beginning, and she retired from acting in 1987.