This is a note written by Timothy to a fan in England by the name of Paul. It’s undated, but as he mentions he’s preparing a production of The Insect Trainer, I’m guessing it was written near the end of his life. There was another note to Paul and an autographed photo from The World’s Greatest Sinner also up for auction on eBay, but I got outbid on those. I can find no information on the English friend of his he mentions.

Excuse the delay. I’m preparing an original play, “Insect Trainer”. Hope to meet you someday. I had a friend from England. He was an actor/writer named Tony Rome [Rowe?]. But he went to the Happy Hunting Grounds. I miss him. Perhaps you could be an ade [aide] to me some day. Thanks. 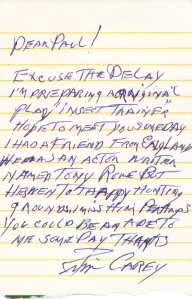 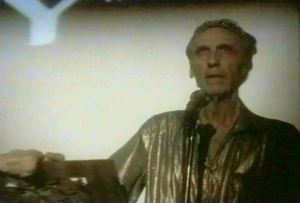