Our pic today is another from Timothy’s cameo appearance in the East of Eden television miniseries. Part I, the only segment in which he appears, first aired on February 8, 1981. He portrays a fire-and-brimstone circuit-riding preacher, warning against the dangers of “the devil’s holy water.” 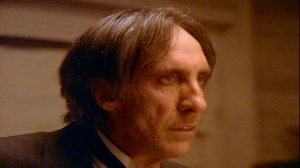 I’m sure the producers realized he had been in the 1955 film as well, and hoped to get a little in-joke going with any film buffs who happened to be tuning in. Not to mention the fact that he portrays characters at complete opposite ends of the moral spectrum.