Today, the 50th anniversary of the assassination of President John F. Kennedy, we revisit The World’s Greatest Sinner (1962), written by, produced by, directed by, financed by, and starring Timothy. Here we see once-humble salesman Clarence Hilliard reveling in his newly-claimed identity as “God” and plotting a complete political takeover as president, as the Devil himself (James Farley) looks on approvingly. 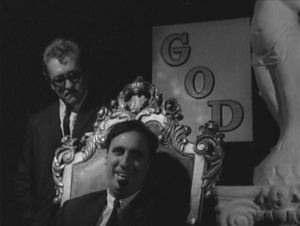 Tim could not have made a more prophetic picture if he’d tried. It may be hard to comprehend at times, but the underlying theme of the absolute corruption of absolute power is unmistakable. Something to keep in mind as we remember a terrible day and ponder the nature of power.