And we’re back! Today we celebrate the 114th birthday anniversary of a true Hollywood legend. The great Robert Ryan appeared in two films with Timothy, Alaska Seas (1954) and The Outfit (1973). Here are the two of them from that latter film, directed by John Flynn. Tim’s nasty thug Jake Menner gets a dressing-down from his boss, Mailer (Ryan). Variety columnist Army Archerd appears in a sly cameo as Mailer’s butler. 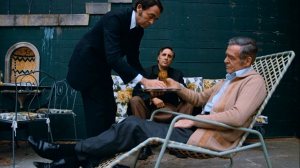 Ryan, born in Chicago, was a gentle and compassionate man off-screen, belying his often cruel tough-guy cinematic persona. His politics were decidedly left of center, and he actively supported many civil rights and pacifist causes. He was, in fact, a co-founder of SANE, the National Committee for a Sane Nuclear Policy. He once said, referring to the notorious Senator Joseph McCarthy, “I was involved in the things he was throwing rocks at but I was never a target. Looking back, I suspect my Irish name, my being a Catholic and an ex-Marine sort of softened the blow.”