Today’s pic takes another look at “The Great Train Robbery,” not the ground-breaking film short of 1903 but the episode of Sheriff of Cochise that first aired just over 57 years ago today – October 5, 1956. Bad guy Stark is robbing this train and he wants you to know it. 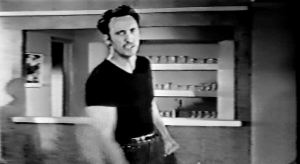 Cochise was another of those shows that sounded like a Western but really wasn’t. It was a contemporary crime drama set in Cochise County, Arizona. The sheriff (John Bromfield) wore a cowboy hat, but that and the Arizona setting are pretty much where the Western resemblance ends.