Today’s pic is an unusual one. It’s a French lobby card for Vincent Sherman‘s The Second Time Around (1961). The French title is La Farfelue de l’Arizona, which roughly translates to The Wacky Lady of Arizona. Okay then! Timothy, as bad guy Bonner, faces down Sheriff Burns (fellow Brooklynite Ken Scott). I’m pretty sure that’s Duane Grey as Bonner’s unnamed sidekick on the left. 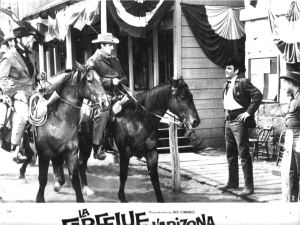 It’s always interesting to come across movie memorabilia from foreign lands and see what the films are called in other languages. For instance, the Mexican lobby cards for Finger Man call the film Balas en la Noche, which translates to Bullets in the Night. Not quite accurate, but evocative.

2 responses to “Pic of the Day: “The Second Time Around” French lobby card”