Our pic today takes another gander at “Ain’t We Got Fun,” the episode of The Untouchables that was first broadcast on November 12, 1959. Loxie, the grinning pyromaniac muscle behind bootlegger Big Jim Harrington (Ted de Corsia), glares at Benny Hoff (Joseph Buloff), whose nightclub has been forcibly taken over by Harrington. 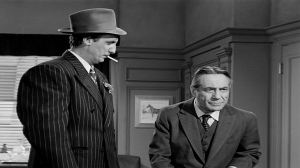 Buloff and his wife were leading figures in Yiddish theater before ending up on Broadway, with Buloff later adding films and television to his repertoire. Upon his death in 1985, he left behind a rather impressive archive of his life and work which you can read about here.