Today we wish a very happy 86th birthday to Joe Turkel! Most folks remember him as one of the three scapegoated prisoners, along with Timothy and Ralph Meeker, from Paths of Glory (1957). However, I bet you didn’t know that he and Tim appeared together (just barely) earlier that year in Russell Rouse‘s House of Numbers. They both had small uncredited roles as, strangely enough, prisoners. Here is the best screen shot I could get with he and Tim in the same shot. 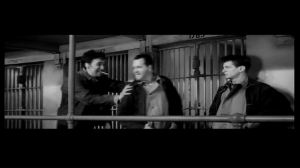 The previous year, he and Tim had also both worked for Stanley Kubrick for the first time in The Killing. Turkel has always been a memorable presence in whatever film in which he appears. We here at the TCE send him warmest birthday wishes!