It’s the evening of Independence Day here in the United States, and I’m trying to ignore the fact that our neighborhood sounds like a war zone. Today’s pic had to be tied to something quintessentially American, and what could be more American than Daniel Boone? Here is Timothy in one of his best performances as loquacious bounty hunter Lute Purdy in the Daniel Boone episode “The Blackbirder.” It was first aired on October 3, 1968. 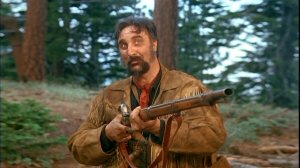 This one truly is a gem. Tim is engaging, funny and rather mean when he has to be, and he’s also in practically every scene. Do not miss it! And happy Fourth of July, everybody!

2 responses to “Pic of the Day: “The Blackbirder” revisited”